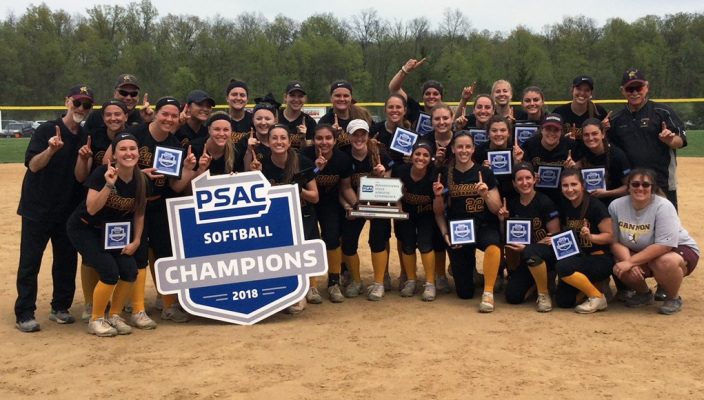 Gannon softball moves onto Super Regional for first time ever

The Knights will play three games against host West Chester University in the Super Regional. The first game will be at noon Thursday and they’ll finish the three with a doubleheader beginning at noon Friday.

Gannon, which owns an overall record of 32-13, opened the Atlantic Regional Thursday with a 10-1 five-inning win over Seton Hill.

PSAC West Pitcher of the Year Madi Beining, claimed her 15th win, improving her record to 15-5.

Sara Ingerick led the offense for the team with four RBIs and Jackie Martinez went 3-for-3 with two RBIs. Freshman Kaity Stocker had two RBIs and Rachel Tanilli and Autumn Smith had one each.

The Knights then beat West Virginia State University, 4-2, Friday and then split a doubleheader with West Virginia Wesleyan College Saturday.

The Knights dropped the first game of the doubleheader, 4-1, but came back with a nine-inning 9-7 victory in the second game. Kennedy DeMatteis improved to 12-7 from the mound with the win.

Sophomore Lisa Szajn was the saving grace in the latter as she stepped to the plate with two outs in the bottom of the ninth and crushed a two-run, walk-off home run over the left-field fence to win the game for Gannon. Szajn went 3-for-5 and the walk-off was her second home run of the game and seventh of the season.

Szajn’s pair of home runs moved the program’s newly set single-season home run record to 46 after the team beat the previous record of 39 set back in 2006.

Taliani broke the record and with the help of Tanilli and Szajn set the new one at 42 in the Atlantic Regional after defeating West Virginia State.

Prior to the Atlantic and Super regionals, the Knights swept the PSAC Tournament, winning all four games, and their first PSAC title. Gannon began the tournament by defeating Bloomsburg University, 4-3. Then the Knights moved on to beat West Chester, 6-2, the next day.

Gannon came back May 4 and defeated Lock Haven University, 7-3, with Beining earning her 13th win. Gannon capped the tourney defeating West Chester again by a score of 5-3.

The Knights will head to West Chester, Pa., Thursday to take on the host Rams in three games. The first game is slated for noon Thursday. The winner of the Super Regional will move onto the NCAA Division II National Championship in Salem, Va., on May 24-28.