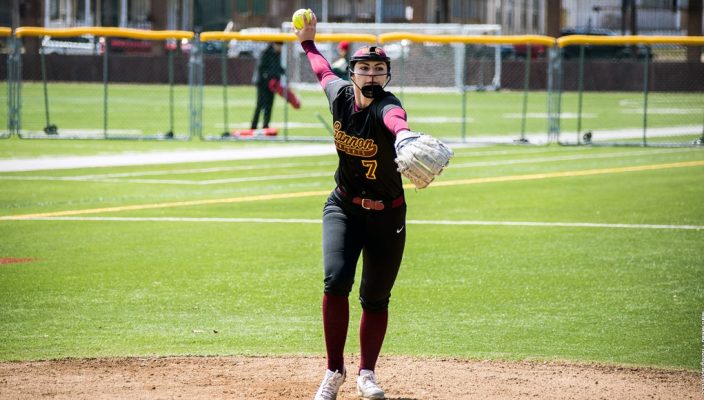 The Gannon University softball team earned its sixth doubleheader sweep of the season against Seton Hill on Sunday, one day after the Knights split a pair of games against California University of Pennsylvania.
The Knights whipped the Griffins, 7-2 and 8-4, at McConnell Family Stadium Sunday after shutting out the visiting Vulcans of Cal U, 7-0, in Saturday’s first game and falling 3-2 in the nightcap.
The 3-1 weekend left Gannon with a 22-11 overall record and a 12-4 mark in Pennsylvania State Athletic Conference action going into Friday’s 2:30 p.m. doubleheader against Edinboro at McConnell Family Stadium.
In Sunday’s first game, Gannon outhit Seton Hill, 10-4. Madi Beining picked up her 10th pitching win of the season in her 11th complete game. She struck out four and scattered four hits.
Kaity Stocker hit her eighth homer of the season to lead Gannon with three RBIs. Rachel Tanilli contributed two RBIs while Jackie Martinez and Lisa Szajn had one apiece.
Tanilli put Gannon up 2-0 in the first inning with a two-run single, scoring Martinez and Maria Taliani. Stocker widened Gannon’s lead to 7-1 in the fourth inning on a deep three-run bomb to right center, her second homer in two days.
In game two, Taliani led Gannon with three RBIs, while Sarah Ingerick had two RBIs and scored two runs. Kennedy DeMatteis struck out two and earned her eighth win in the circle.
Seton Hill led 1-0 before Taliani tied it up in the bottom of the first with an RBI single that scored Kristina DeMatteis. The Knights extended their lead to 7-1 with a six-run second inning.
Taliani’s two-run homer keyed the rally, which also included Ingerick’s RBI single and run-scoring doubles by Stocker and Lyndsey Lakatos.
Ingerick’s RBI single in the third gave Gannon an 8-1 lead, and the Griffins never threatened from that point on.
In Saturday’s first-game win over Cal U, Stocker led Gannon with three RBIs, while Tanilli had two. Beining tossed her fifth shutout of the season with a three-hit complete game. She struck out five batters to match her season-high.
The Knights plated three runs in the fifth inning on three bases-loaded walks to make it 5-0. With two outs in the seventh inning, Tanilli smacked a two-run double, scoring Taliani and Ingerick.
In Saturday’s second-game loss, Taylor Wilp led Gannon with two hits while Martinez had an RBI.
Gannon got out to a one-run lead in the first inning when Martinez scored from second on a dropped fly ball. The Vulcans scored a pair of unearned runs in the second inning to take a 2-1 lead, then added another run in the third.
Gannon got one run back in the top of the seventh inning on Martinez’s RBI fielder’s choice, but Cal U held on for the win.
Gannon’s 23 home runs ranks third in the PSAC, while its 179 RBIs also ranks third. On the pitching side, the Knights lead the conference in ERA at 1.90.
Individually, Stocker’s eight home runs ranks third among PSAC players. Martinez has reached base safely in 14 consecutive games, while Tanilli has reached base in 10 straight games.
Following Friday’s home doubleheader with Edinboro, the Knights will close out the regular season with a 1 p.m. doubleheader Saturday at Slippery Rock.
After this weekend the team will also conclude its “Dollars for Doubles” program that helps raise money for Make-A-Wish.
At the beginning of the year coach Joe Dolak thought of the idea and each player was assigned with finding people to pledge money for each double hit this season.
So far the team has 64 doubles on the season.
Team members had a goal of raising $500, but junior Autumn Smith believes they have passed that mark.
“The pledges vary,” she said. “It’s really just whatever an individual wants to pledge. We have people going from 10 cents to $1 per double.”
Smith said she thinks it’s important for the team to do things like this that help others.
“It goes to show that [you] can help to make a difference, and impact an event that will make a kid very happy later down the road,” she said. “It brings us as a team together because it shows that its bigger than us, it’s bigger than one game, or even maybe a championship if we can help to change someone’s life, or give them something that they may never have gotten to experience in the future without our help.”
After two doubleheaders Friday and Saturday the team will get ready for the PSAC Tournament.
Tournament action will get underway Wednesday, May 2, in Quakertown, Pa.