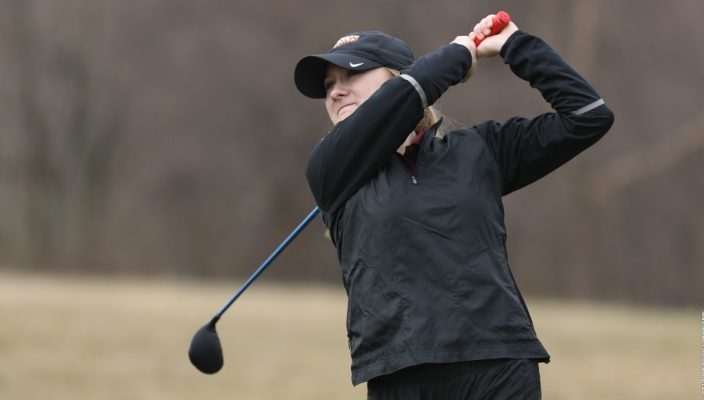 The Gannon University men’s and women’s golf teams competed in separate tournaments over the weekend, with the men traveling to Indiana, Pa., and the women heading to Ashland, Ohio.
The men’s team placed fourth among 15 teams at the Cecil C. Spadafora Golf Invitational, which was trimmed to a one-day event due to bad weather.
The women’s team also ran into weather issues, as the final round of the Ashland Invitational was canceled due to rain. The Knights placed 10th among 15 teams with junior Julia Santo leading the team.
Katie Chipman of Grand Valley State tied with teammates Mackenzie Blomberg and Samantha Moss for first with a score of 1-over-par 73.
Santo finished the match tied for 20th with a score of 80. Behind her tied for 34th place was Carley Sawyer with a score of 82.
Santo said that she thought the team played well and was happy to hit the links in the sunshine before the bad weather arrived.
“It was funny because the weather was so nice and the sun was shining so much that we weren’t quite sure how to react,” Santo said. “It was almost 80 degrees during our practice round and our first round didn’t fall far behind.”
Prior to the Ashland Invitational, the Knights were in the Dr. Edwin B. Cottrell Invitational on April 10 in West Chester. Gannon came in seventh out of 12 teams.
Manuela Quevedo scored the best in the opening round with an 84 on the par-70 course. She ended up tying for 19th after her final round of 86 gave her a two-day total of 170.
Cristina del Diego followed Quevedo in the final round, shooting a team-best score of 84 on the day. She tied Sawyer for 24th with a two-day total of 173.
Kutztown University took home first and Camden Morrison of Franklin Pierce University and Krystal Knight of Merrimack College tied for first individually.
The men’s team also played in the Cottrell Invitational and placed ninth in the 10-team field. Matt Barto led the charge for the Knights, tying for 19th with a score of 155 over the two days.
California University of Pennsylvania won the event with the Vulcans’ Austin Smith taking medalist honors with a score of 142.
Up next, the men’s team will play Saturday in the one-day Gannon Spring Invitational at Whispering Woods Golf Club. Last season, the men tied for third in the eight-team Spring Invitational field.
Barto said he is confident about the team’s chances going into the Gannon Spring Invitational, which will be followed by the two-day Mercyhurst Invitational Sunday and Monday at Lake View Country Club.
“As for the Mercyhurst Invitational, we need to just be more aggressive there since there are low scores to be had,” he said. “I know for me, I usually play one nice round and one mediocre round, which has always held me back from winning individually.
“As a team, we are always too average, so maybe fourth at IUP and a quick win at our event could springboard us to a good finish at Mercyhurst and a good regional later on.”
The women’s team will compete in the Mercyhurst Invitational at Lake View Country Club Saturday, which will consist of one day of competition.
The women had two first-place finishes at the invitational last season, which was hosted twice — once in September of 2016 and once in April of 2017.