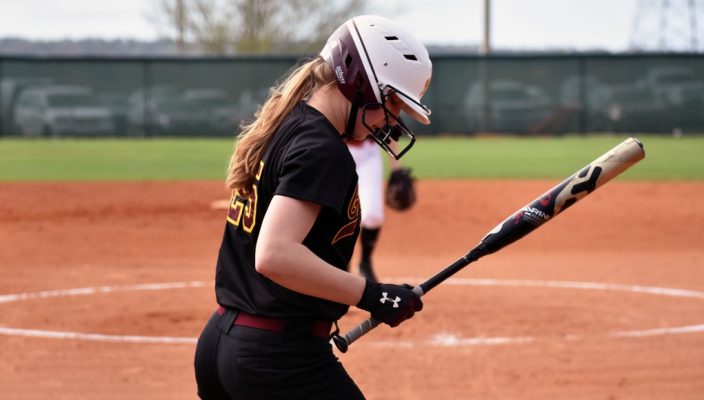 The Gannon University softball team is 16-9 after winning a doubleheader against Notre Dame College (Ohio) Tuesday in a nonconference matchup. The Knights won 13-1 in five innings in game one and 5-3 in the second game.
After the Knights’ first doubleheader with Mercyhurst was postponed from March 29 to April 2, they went on to lose a doubleheader to California University of Pennsylvania, 7-1 and 4-3, on March 31 in their opening Pennsylvania State Athletic Conference (PSAC) games.
Two days later Gannon came back and beat the Lakers, 1-0 and 4-3, at McConnell Family Stadium.
In the opener against Mercyhurst, the game remained scoreless until the bottom of the seventh. Kaity Stocker led off the inning with a single and pinch-runner Rachel Tanilli came on to steal second. She then scored the game’s only run with two outs on Kristina DeMatteis’ long single.
Madi Beining held the Lakers at bay and pitched a complete-game two-hit shutout for her fifth win.
In the nightcap, the Lakers struck first with two runs in the first off Beining, who came back to start the second game and went the first two innings.
Stocker answered with a solo home run in the bottom of the first and after Mercyhurst added a run in the third, Stocker drove in Lisa Szajn to cut the Lakers’ lead to 3-2 in the bottom of the third.
The seventh inning proved vital for the Knights. Trailing by a run with the bases loaded, Kherrin Morgan was hit by a pitch, which was enough to score Kellyn Perich from third. Ingerick put the lid on the jar driving in Tanilli with a single for the 4-3 win.
On Friday, Gannon traveled to Greensburg to face Seton Hill University and used a strong offense to sweep the Griffins in a doubleheader, 10-4 and 8-2.
On Sunday, the Knights took two more wins, beating Slippery Rock, 7-4 and 8-2.
In game one, Slippery Rock struck first with two unearned runs, but Gannon answered when Maria Taliani hit a two-run home run, and Szajn hit a solo home run two batters later to put the Knights ahead 3-2.
The lead changed hands until the fifth inning when Gannon captured it for good after freshman Lyndsey Lakatos hit her first grand slam as a Knight scoring Perich, Nicole Bush and Stocker. All of Gannon’s runs came via home runs.
Game two was another offensive show as freshman starting pitcher DeMatteis crushed a two-run home run in her first career at-bat to put the score at 2-1 in the second inning.
The Knights went on to score five in their half of the second to make the score 5-1.
DeMatteis came up big again in the fourth hitting a three-run double to give the Knights an 8-1 lead.
Slippery Rock was only able to score one more run after that in the seventh, and Gannon picked up two more wins on its home turf.
Up next, the Knights will head to Edinboro for a doubleheader Friday against the Fighting Scots. The first game is at 2:30 p.m. and the second at 4:30 p.m.
Gannon will also be in action Saturday at rival Mercyhurst in a 1 p.m. doubleheader.
The Knights will then host Pitt-Johnstown at 2 p.m. Monday in a doubleheader at McConnell Family Stadium before taking to the road Tuesday for a 3 p.m. doubleheader at Clarion.