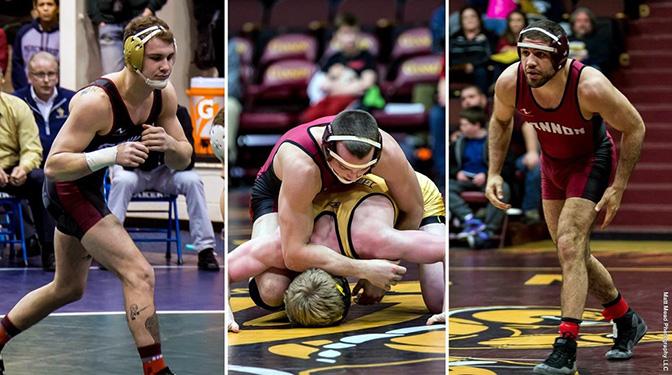 The Gannon University wrestling team has officially put the cap on a very eventful — and successful — season, with three members reaching the pinnacle of competition — the NCAA Division II Nationals, held last weekend in Cedar Rapids, Iowa.
George McGuire, competing at 149 pounds, and Nate Ross at 165 pounds, both opened their tournament appearances with victories before being eliminated with two straight defeats.
Eric Lewandowski, wrestling at 157 pounds, faced the nation’s fifth- and sixth-ranked wrestlers in his first two matches and lost them both.
On the season, the team as a whole dealt with many big moments for the program as well as moments of upsets as individuals.
Gannon coach Don Henry described it as a season of ups and downs, noting that the team dealt with many injuries that prevented it from putting its 10 best wrestlers on the mat very often.
“When we did, we were very good,” Henry said. “Fourth place at national duals was a huge accomplishment.”
The day before the Division II national tournament in Iowa got underway, the Gannon wrestlers and coaches used the opportunity to spend time at a local youth center. The wrestlers appeared to truly enjoy their time playing games with the kids, signing autographs and teaching them about the sport of wrestling.
When the next day hit, it was all business for the first round of wrestling.
McGuire started the day in an exciting fashion by recording a 1:42 pin fall victory over Adams State’s Natrelle Demison, ranked No. 12 in the country.
McGuire then lost, 9-5, to Frank Yattoni of Wisconsin-Parkside in the quarterfinals before being eliminated in a 10-8 loss to Isaiah Kemper in the consolation bracket.
Kemper, of McKendree, was ranked No. 5 in the nation.
As the day moved on, though, the team would face many heartbreaking close finishes that would not end in their favor.
After suffering a 5-4 loss to Qiante Wagner of McKendree in the first round, Ross would earn his last victory in a Gannon singlet with a 3-1 sudden victory in overtime over Koery Windham of Adams State in the consolation round.
Ross, making his second trip to nationals, was then eliminated in a 6-3 loss to Blake Perryman of Northern State.
Lewandowski, also making his second trip to nationals, lost 5-3 to Wisconsin-Parkside’s Fernevion Shepperd in his opening match and then was eliminated in a 12-3 major decision loss to Tyler Miles of Newman — the nation’s fifth-ranked wrestler.
Henry said he had “many mixed emotions” regarding the team’s performances at the Super Regional One and Division II national tournaments.
As for nationals, Henry said the Knights “did not bring what it took to place.”
But he called Ross’ regional championships “awesome” and saluted McGuire for his second-place effort at regionals.
He also pointed out that Lewandowski had Pitt-Johnstown’s Cody Law — the nation’s top-ranked wrestler at 157 pounds – on his back for a six-point lead only to lose 11-9.
“He battled back to take third,” Henry said of Lewandowski.
Henry said he’s already looking ahead to next year’s schedule. The Knights will lose four starting seniors from this year’s 8-5 dual meet team, and those four combined for seven national championship appearances and two All-American place winners.
“So it will be a pretty big hole to fill,” Henry conceded.
But the Knights return six starters along with several redshirts in Anthony Williamson (165/174), Evan Fisler (149/157), Brad Nagy (165), Joe Leise (174) and heavyweight Keith Swartley.
“So we will be solid,” Henry said.
In addition, the Knights will boast returning regional placers Jake Dunlop (125) Abe Gurriello (125 in 2017), Ethan Budd (197) and PSAC place-winner Austin Hertel (133). National qualifiers Carmine Ciotti (141) McGuire (will move up to 157) and Nick Costa (184) also plan to return.
“The future looks good,” Henry said.