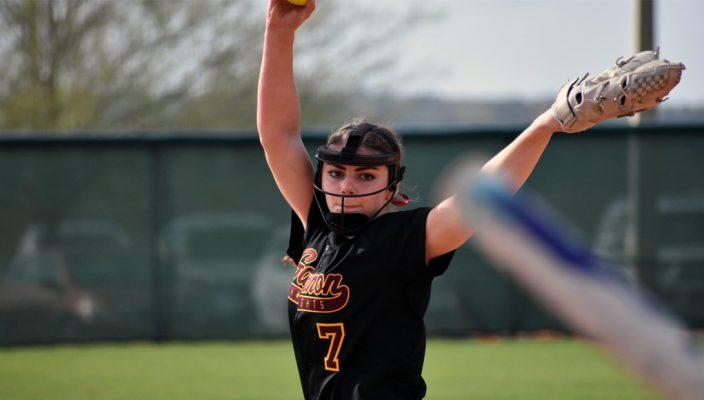 The Gannon University softball team took three out of four over the weekend at the Salem Invitational in Salem, Va., to improve its overall record to 8-7 on the season.
The Knights went unbeaten on the opening day of the tournament Friday, posting a 12-0 win over host Salem in five innings before defeating Chowan, 7-3, in game two.
Gannon opened play Saturday with a narrow 3-2 loss to Shepherd, falling on a walk-off run in the bottom of the seventh, before cruising to a 10-1 win against Winston-Salem in game two.
On Sunday, the Knights’ scheduled game against Wheeling Jesuit University was canceled because of poor weather in the forecast.
In Saturday’s game against Winston- Salem, the Knights jumped out to a 4-0 lead thanks to a pair of bases-loaded walks. Rachel Tanilli scored Sarah Ingerick on an RBI single and Ashley Bower scored Kaity Stocker on a fielder’s choice.
Gannon had another four-run inning in the third, kicked off by Stocker’s solo home run. Kellyn Perich smacked a three-run double to cap the inning. Gannon led 8-0 after three innings.
In the bottom of the fourth inning, Stocker hit her second homer of the game, this time a two-run shot, to lead Gannon to a 10-1 win.
Stocker finished with two hits and four RBIs while Perich had three RBIs to go with five innings of five-hit pitching. She struck out six and walked only one.
In Saturday’s first game, the Knights got out to a 2-0 lead in the third inning when Ingerick smacked a two-run double, scoring Perich and Ashley Bower. The Rams tied things up in the sixth inning on a bases-loaded walk. With one out in the seventh, Shepherd scored the game-winning run on Rachel Taylor’s RBI single.
Both of Friday’s games were successful for the Knights, as they claimed a pair of wins.
Against Chowan, the Knights took control for good with a three-run fourth inning rally, which started with two outs and no one on base. Jackie Martinez struck the key blow, a two-run double that brought home Perich and Taylor Wilp, both of whom had reached on an error.
Lisa Szajan, who started the two-out rally by getting hit by a pitch, scored the first run on the second Chowan error of the inning.
The three-run fourth put Gannon up 5-2, and the Knights added two more in the seventh on Lyndsey Lakatos’ two-run triple to close out the scoring.
Kherrin Morgan’s RBI single put Gannon on the board in the first inning and Ingerick added a sacrifice fly in the third.
In Friday’s game one, the Knights erupted for 11 runs in the fifth and sixth innings to put the game away.
Martinez had two hits, scored two runs and drove in four to lead Gannon’s attack. Stocker added a pair of RBIs while Perich and Tanilli each had two hits. Perich also scored three times in the win while Wilp scored twice.
Perich has reached base safely in 15 consecutive games. She extended her hit streak to 11 games Saturday. Stocker has a team-high three home runs and 13 RBIs on the year.
The Knights return to action Wednesday with a doubleheader against Lake Erie College that is scheduled to start at 3 p.m. at McConnell Family Stadium.
Gannon also will be home Saturday for a 1 p.m. doubleheader against Pitt-Johnstown before taking to the road to battle Clarion in a 4:30 p.m. doubleheader Wednesday, March 21.