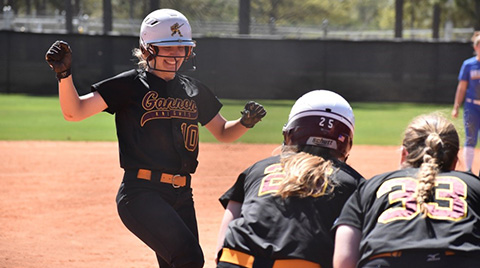 Gannon University’s softball team is currently 5-6 after starting its 2018 season in Clermont, Fla.

The Knights opened the season with a 2-0 loss to Davenport University on Feb. 25. Sophomore Madi Beining pitched a complete game, allowing two runs on five hits.

Despite hits from by senior Jackie Martinez, juniors Kellyn Perich and Kherrin Morgan and sophomore Taylor Wilp, Gannon was not able to score.

The team was able to battle back hours later and beat American International College, 9-0, in five innings.

Freshman Kennedy DeMatteis held American International to three hits in the shutout while going 1-for-2 at the dish. She picked up her first win of the season and as a Knight.

The Knights split Monday’s doubleheader, starting the day with a 3-2 walk-off victory against Lake Erie College.

In the bottom of the seventh, Wilp led the charge getting on base and was then bunted to second by sophomore Jackie Vizza. Perich then stepped to the plate and hit a missile that drove in Wilp from second base.

Beining also was able to redeem herself and get her first win of the 2018 season.

Unfortunately, the momentum didn’t carry over to game two as Davenport proved to be Gannon’s kryptonite, beating the Knights 6-4. Gannon produced five hits off the bats of Martinez, Morgan, DeMatteis, Wilp and freshman Lyndsey Lakatos.

Florida wasn’t able to hold back Beining the next day as she bulldozed Lake Erie College in a 1-0 shutout claiming her second victory of the season and the 11th of her career. Sophomore Rachel Tanilli also recorded two extra-base hits.

The Knights were then matched up against a new foe in Kentucky Wesleyan College. Gannon fell to the Panthers, 2-1, in the second game of the day.

It was an offensive showdown in game one against Cleary as Gannon posted 11 hits and Cleary connected 16 times. However, four Gannon errors gave Cleary the edge for a victory.

Later on in the day the Knights faced Kentucky Wesleyan yet again and fell 5-4 despite having zero errors to the Panthers’ two.

Friday, the Knights started the day in an 11-inning, 6-5 loss to Missouri-St. Louis. Gannon started the extra innings after Perich delivered a double that scored Wilp to tie the score 5-5.

After, that there was no scoring until the ninth and 10th innings, and in the 11th inning Missouri-St. Louis scored the sixth and last run of the game.

Gannon fought hard to come back with runners on first and second with no outs in the bottom of the 11th, but back-to-back strike outs and a groundout to shortstop ended the game.

The Knights didn’t let the extra-inning loss discourage them out as they headed into their second game of the day against the Ursuline Arrows.

Gannon defeated the Arrows 9-0 in five innings, marking the Knights’ second five-inning game of the season.

Beining tossed a complete game from the stripe and only gave up three hits while Gannon recorded nine.

The Knights drew blood first in the second inning and scored two with the bases loaded on a single by Perich that scored freshman Kaity Stocker and sophomore Lisa Szajn.

In the third Gannon managed to load the bases again and Stocker cleared them with one swing of the bat, as she belted a grand slam for her first career home run. That made the score 6-0 going into the fourth.

The Knights kept their foot on the gas as sophomore Rachel Tanilli launched a three-run home run of her own, ending the scoring for Gannon after nine trips across the plate.

Gannon concluded its trip to Florida with an 8-2 win over Felician College Saturday. Perich toed the rubber for the Knights and picked up her first victory of the season, pitching all seven innings.

Gannon was first on the board as Perich scored on Morgan’s sacrifice. Szajn followed up with one of her three hits in the game as she hit an RBI single scoring Martinez, who had three hits.

Stocker ended the inning with a double that scored two more Knights, giving them a 4-0 edge over Felician.

Perich and Morgan produced another run for Gannon as Perich scored on a groundout by Morgan in the third.

The Knights added one more run in the fifth and two more in the sixth to go up 8-0.

Gannon ended the game with 13 hits. Perich, Martinez, Szajn and Stocker all had doubles and Martinez and Szajn each had three hits.

The Knights will head to Salem, Va., Friday for five games over the span of three days at the Salem Invitational. They’ll open the invitational 3 p.m. Friday against Salem University.