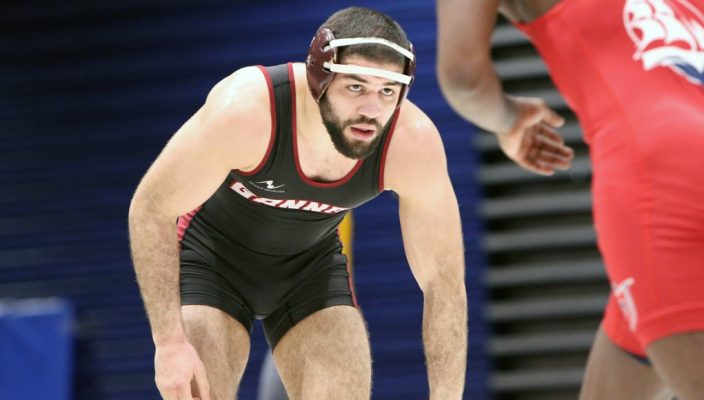 Over the course of the season, starters for the Gannon University wrestling team have competed in just over 200 matches.
That’s 200 different mindsets, styles and scenarios that have played out to lead to the six or so matches that truly matter on the season.
Several of those matches took place the weekend of Feb. 23-24 in Johnstown at this year’s NCAA Division II Super Regional One tournament. The event decides which wrestlers will punch their ticket to compete and attempt to be an All-American and possibly a national champion.
Three Gannon wrestlers passed their regional tournament tests and will represent their school in the Division II national tournament this weekend in Cedar Rapids, Iowa.
George McGuire, at 149 pounds, Eric Lewandowski (157) and Nate Ross (165) have been competing with and beating some of the best wrestlers in the region and nation throughout the year, and they’ll get the chance to battle on the nation’s biggest stage this weekend.
Ross wound up winning his weight class at the regional meet while McGuire finished second and Lewandowski third.
Ross came into the tournament unranked and battling different injuries, but as many have said before: It’s not how you walk into a tournament that matters, it’s what you walk out WITH that does.
Ross is officially in the record books of having one of the most impressive performances as a competitor in Gannon history. On his way to claiming a regional title, Ross would take victories over the Nos. 1, 2 and 4 seeds in his bracket.
“Honestly, I wish we could have taken everyone — I think everyone on our team is extremely talented,” Ross said about his team’s performance in Johnstown.
“The Super Region One tournament is one of the toughest in the entire nation — it’s very, very cut-throat.”
Gannon finished fourth among 15 teams in the tournament.
Lewandowski had much of the same success he had in the regular season in the regional tournament, going 2-0 on the first day with his first match on the second day being the biggest of the year for him.
Cody Law of Pitt-Johnstown sits on top of the rest of the nation in his weight class as well as being ranked in the pound-for-pound division in Division II.
The wrestlers would go back and forth on the scoreboard and Lewandowski fell just short with an 11-9 loss.
He then controlled his next two opponents and ended up finishing third and earning his second trip to the national tournament as well.
McGuire is the lightest Gannon wrestler headed to Cedar Rapids but that shouldn’t fool you at all for what type of competitor he has been throughout the year.
McGuire is known for being aggressive and all-business on the mat, but if you ask any of his teammates they would tell you how much of a nice and stand-up guy he is.
In Johnstown, he exhibited both qualities as he pushed his way to the championship match after winning three bouts in all different ways.
He opened day one with a first-period pin fall, then moved on to claim his eighth tech fall win, which puts him among the nation’s leaders in the category. He finally got a major decision win over second-ranked Corey Falleroni of Pitt-Johnstown.
McGuire then went toe-to-toe with the nation’s No. 2-ranked wrestler in Taylor Misuna of Notre Dame, who also is ranked No. 1 in the region.
The two were in a highly active matchup with both wrestlers hitting multiple explosive moves, but McGuire fell just short, losing 9-6.
The opening round of this weekend’s national tournament starts Friday morning. Ross, ranked No. 4 nationally, will open against Qiante Wagner of McKendree.
McGuire, ranked seventh nationally, begins by taking on 12th-ranked Natrelle Demison of Adams State.
Lewandowski, also ranked seventh nationally, will battle Pernevion Shepperd of Wisconsin-Parkside, who is ranked No. 6 in the division.