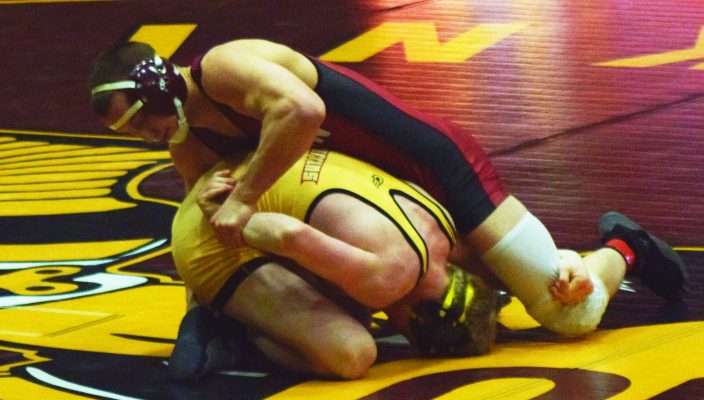 The Gannon University wrestling team officially capped off its regular season with a satisfying 20-15 victory over rival Mercyhurst Saturday, and now has its sights on this weekend’s NCAA Division II Super Region One Tournament.
The two-day event will get under way Friday in Johnstown and will conclude Saturday.
The Knights go into the event with one nationally ranked wrestler — Eric Lewandowski, who is ranked No. 12 at 157 pounds — and 10 regionally ranked competitors.
Lewandowski, one of the Knights’ three returning All-Americans, placed seventh at last year’s NCAA Division II National Championships. He owns a 5-1 overall record this year and is ranked No. 4 in the region.
The Knights finished their regular season dual-meet schedule in the best way you could write it up by taking rival Mercyhurst down a peg or two and beating the Lakers in their own gym.
This match had a sense of electricity behind it that the Knights have become familiar with throughout the course of the season.
Gannon held up under the pressure, taking six of 10 bouts in handing the Lakers their first home loss of the season and second overall of the year.
The Knights got their first win of the night from Austin Hertel, who has been a solid addition to the team since declaring for Gannon last year.
The freshman 133-pounder collected his ninth dual victory by beating Alexis Soriano, 9-5. The win moved Hertel into a tie for most dual wins on the season at nine with Nick Costa and Nick Budd.
Hertel is looking to prove something this weekend in Johnstown as he is currently ranked fifth in the region with a 12-4 overall record.
Carmine Ciotti, another returning All-American, claimed Gannon’s next victory, decisioning Kevin Kinyua, 10-4, at 141 pounds, for his 14th win of the season.
Ciotti enters the regional tournament ranked No. 6.
Gannon’s George McGuire made it three wins in a row over the Lakers as he whipped Logan Grass, 10-4, at 149 pounds. McGuire is ranked No. 3 in the region
McGuire’s win might have been the most impressive of the evening, as Grass was ranked 12th nationally and No. 2 in the region at the time of the match.
Lewandowski had an impressive outing against Mercyhurst, as he was able to collect a 19-2 tech fall in the third period. Bonus points for a team are always something wrestlers push for and this would help the Knights move to a 14-3 lead.
Jake Stratton and Nick Costa claimed the last two victories for the Knights and both came by decision.
Stratton, ranked eighth in the region at 174 pounds, handled a slower-paced matchup that he was still able to control for an 8-3 win.
Costa, ranked third in the region at 184 pounds, competed in a very close match that went into a double overtime but he came away with a 7-5 win over Dakota DesLauriers, ranked fifth in the region.
Both Costa and DesLauriers are returning national qualifiers and are looking to push their way through the competition this weekend.
Other regionally ranked wrestlers competing this weekend for Gannon are Jacob Dunlap, who is fifth at 125 pounds; Chris Matthews, who is No. 8 at 165; Ethan Budd, who is eighth at 197; and Nick Budd, who is fifth in the heavyweight category.
The top four finishers in each weight class at this weekend’s regional tournament will qualify for the NCAA Division II National Championships, set for March 9-10 in Cedar Rapids, Iowa.