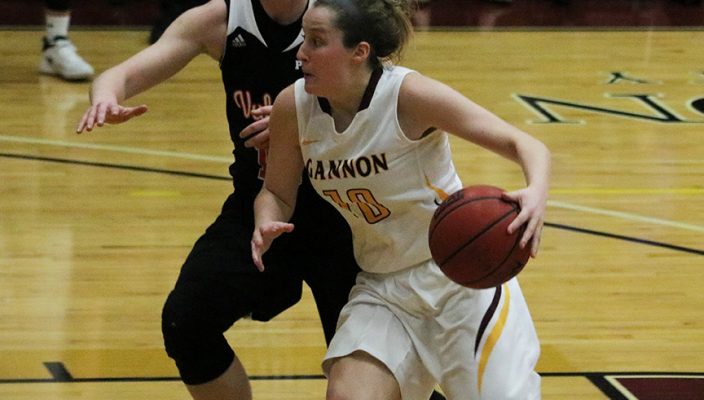 The Gannon University women’s basketball team completed a sweep of crosstown rival Mercyhurst Saturday by posting a 75-59 victory in the Porreco Pride of Erie Game at the Mercyhurst Athletic Center.Maggie Mitchell scored 25 points, grabbed eight rebounds and collected eight assists for the Knights, who clinched a fifth-place berth in the Pennsylvania State Athletic Conference Tournament with the win.
The victory snapped a four-game losing streak for Gannon and left the team with an overall record of 14-12 and a PSAC mark of 11-9 going into Wednesday’s 5:30 p.m. conference matchup against Clarion at the Hammermill Center.
The Knights edged the Golden Eagles, 50-46, in the first matchup of the season on Jan. 13.
In Saturday’s game against Mercyhurst, Gannon shot 55.1 percent from the field, making 27 of 49 shots.
In addition to Mitchell, Nicole LaCava also touched double digits in the scoring column with 15 points on 6-of-8 shooting. Chelsea Rourke recorded a career-high seven assists and Ruta Vetra tied a career high with seven rebounds for the Knights.
Gannon led by five after one quarter and widened that to 11 at 31-20 by halftime. By that point, Mitchell led the Knights with 12 points.
Gannon started strong in the third quarter with an 11-3 run, spurred by back-to-back buckets from Lauren Tewes. This left the Knights with a 42-23 lead.
Gannon continued to hit on all cylinders as the Knights outscored Mercyhurst 23-12 in the third quarter to take a 54-32 lead to the final period.
The Knights continued to dominate until there were 6 minutes and 32 seconds remaining when Tewes hit a trey to give them their largest lead of the afternoon at 63-40.
Mercyhurst followed with a 16-4 run to cut the deficit to 11 at 67-56 with 3:20 remaining, but Gannon managed to hold off the Lakers in the final minutes to secure the victory.
Heading into this week’s action, the Knights were in fifth place in the PSAC West with no chance of catching fourth-place Seton Hill, which owned a 14-6 PSAC record with two games to play.
Gannon is one spot ahead of Slippery Rock, which is 10-11 in conference play with just one game remaining — Saturday’s 1 p.m. meeting with the Knights at the Hammermill Center. That will be Gannon’s final regular-season game of the season.
The top six teams in the PSAC West advance to the conference tournament. The top two teams will receive first-round byes while the sixth-place team will travel to meet the third seed and the fifth-place finisher will travel to meet the fourth seed.
Both first-round games will be played Monday. Tournament quarterfinal action will take place Wednesday, Feb. 28, while the final four will take place March 3-4.
The top remaining seed in the West following the quarterfinals will host the semifinals and finals.
CRISTINA DEL DIEGO
deldieg001@knights.gannon.edu