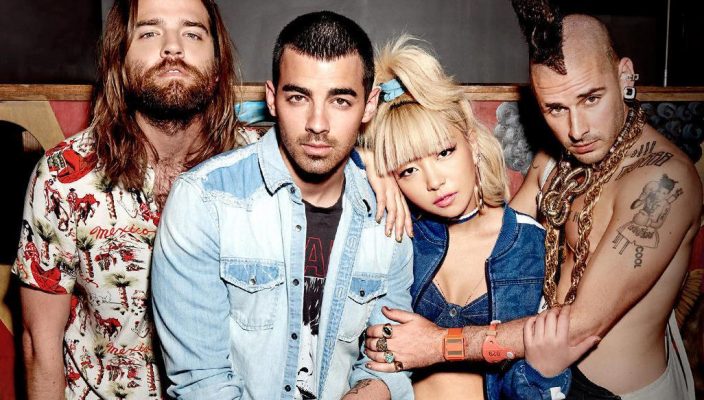 DNCE to play at Hammermill

Gannon University is set to welcome pop-band DNCE at the Hammermill Center on Saturday, April 14. The concert will start at 9 p.m. with doors opening at 8 p.m.
Students, faculty and interested community members gathered at the Knight Club Friday evening to hear the announcement of the spring concert act brought in by Gannon University’s Activities Programming Board (APB).
Those in attendance enjoyed free food, crafts and music before the concert act was revealed at 8:30 p.m.
Many of the beach-themed decorations found at the reveal party made sense after the band was announced as the act, due to the popularity of DNCE’s hit song “Cake By the Ocean.”
Student reaction to the announcement of DNCE as the concert act was mixed, with some students excited and others disappointed that their guesses did not make the cut.
Junior mortuary science major Stephen Knouse said he was genuinely surprised and impressed by the act selection.
“I plan on attending the concert because it’s a large name for Gannon to be bringing to the Hammermill and even if you don’t listen to them [DNCE] on a regular basis, they still have catchy music that will make for a great concert.”
Other students were more skeptical about the artist, with concerns about their limited number of hit songs.
“I am not so sure how many students are actually going to end up going,” said sophomore physician assistant major Stephen Boylan. “Most people I talked to only know their one song, ‘Cake By the Ocean.’”
Many challenges were presented during the planning for this year’s concert due to a limited APB staff and time constraints.
According to the APB concert chair Eva Augustyniak, there is usually about a one-year time frame in which the concert planning occurs. However, this year she was only given three months.
Because of the limited time, there was only one viable date left in which the Hammermill was available due to other sporting games and events.
Since the available date fell on April 14, many possible concert act choices were unobtainable due to the Coachella Valley Arts and Music Festival falling on the same weekend.
Lastly, the concert act had to be approved by Campus Mission and Ministry, which eliminated some rappers and other pop choices.
After narrowing down the choices to about five acts, members on the APB board were able to give their input.
“We decided on DNCE because it seemed to be the biggest crowd pleaser and they also have a lot of songs that are easy to dance to,” Augustyniak said. “I really am trying my best to make sure that everyone has a great time at the concert, even if the artist might not be their cup of tea.”
Tickets for the concert are set at $10 for Gannon student presale pricing, and will increase to $15 on Saturday.
Tickets will also become available for the public to purchase on Saturday for $25.
Both student and public tickets can be purchased at gannontickets.com, or at the venue the day of the event for $30.