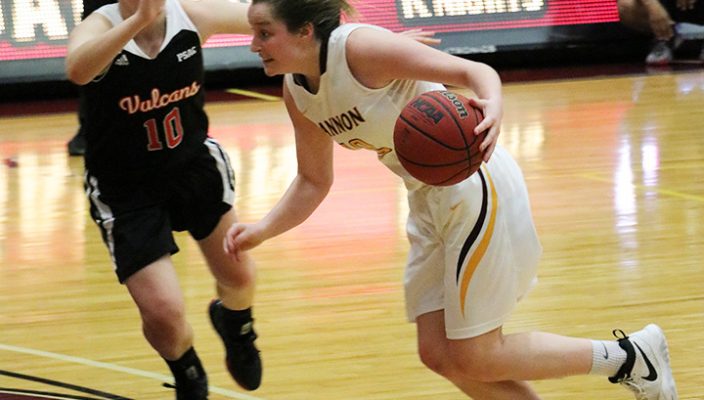 Women’s basketball 13-12 after defeat by IUP

The Gannon University women’s basketball team saw its losing streak reach four games with a trio of losses last week, and the Knights will look to stop their skid Saturday when they travel across town to take on rival Mercyhurst.
On Monday, Gannon was overpowered in the second half and lost to No. 12 Indiana University of Pennsylvania, 71-38, at the Hammermill Center.
On Saturday, the Knights dropped a 63-42 decision to host Edinboro, and three days earlier, Gannon fell to visiting California University of Pennsylvania, 60-52.
The three losses left Gannon with an overall record of 13-12, and the Knights will bring a 10-9 mark in Pennsylvania State Athletic Conference play into Saturday’s 1 p.m. Porreco Pride of Erie Game matchup at Mercyhurst.
Gannon won the first Porreco Pride of Erie Game on Jan. 17, 85-57, at the Hammermill Center and Maggie Mitchell took home the Game Changer Award with 28 points and nine assists.
In Monday’s game, Indiana had a great second half that Gannon could not overcome. Julia Braungart led the Knights with 12 points to go along with three rebounds. She hit 2-of-5 triples and also she had a team-high two assists.
Chelsea Rourke, who tied a career-high with four blocked shots in the game, mentioned later how well the team is playing together and showing resiliency. But she added that in order to win the conference, the Knights will have to work more on coming out strong in the third quarter and putting two halves together.
Braungart, meanwhile, remained optimistic despite last week’s losses.
“I am super pumped for the game against Hurst,” she said. “We want to come out strong, together and show what Gannon basketball is about.”
Indiana led 29-18 with 2 minutes, 33 seconds to go in the second quarter Monday, but Gannon closed out the half on a 7-2 run capped off by a pair of Rourke free throws, making the score 31-25 at halftime.
But the Crimson Hawks outscored the Knights 12-0 during one stretch of the third quarter and took a 49-31 lead going into the fourth quarter. The Hawks continued to pull away in the final period and wound up with an easy win behind Megan Smith’s 31 points and six rebounds.
The Knights held their own early on against Edinboro until a big third quarter by the Fighting Scots propelled them to victory.
Braungart led Gannon with 13 points, and she was the only Knight to reach the free throw line in the game, as she connected on 5-of-6 shots. Ruta Vetra led the Knights in rebounding with six in just 11 minutes of playing time.
Edinboro outscored the Knights by four points in the first quarter and three in the second quarter to build a seven-point halftime lead. But Gannon was outscored, 18-7, in the third quarter as Edinboro moved to a comfortable 49-31 lead.
Ciara Rosten led Edinboro with 30 points and 13 rebounds.
In the loss to California University of Pennsylvania, the Knights outrebounded the Vulcans, 30-28, but came up short on the scoreboard. Gannon was paced by Nicole LaCava’s 13 points and five rebounds while Mitchell added 12 points and eight assists.
The Knights trailed by 11 at halftime, but Cal used an 8-3 run to finish the third quarter with a 49-33 lead heading into the final period.