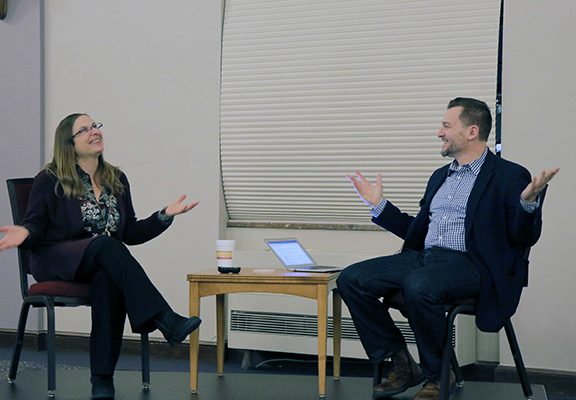 Alix Wall, whose family survived the Holocaust, visited Gannon University Thursday to tell students of her family’s history and show them how one song bonded several people around the world.
“Forget not the past, not for one single day.”
This was one of the verses Wall played from a Yiddish song titled “Dos elnte Kind” or “The Lonely Child.”
This song was written and sung by a friend of her grandmother, Shmerke Kaczerginski.
Jana Fox, a senior biology major who will be one of the students attending a senior seminar trip to Poland next semester, said she thought it was really intriguing and interesting because she enjoys history too.
Throughout the presentation, Wall discussed her family history and why she thought the past needed to not be forgotten.
Wall said in 1995, her mom, Sarah Krinski, heard the song at the Washington Holocaust Museum and that was when she realized Kaczerginski wrote the song about her and her mother, Rachel Pupko-Krinski.
“I really liked that her mom has a song written about her and she knew as soon as she heard it that it was about her,” Fox said.
After her mom’s death, Wall said she asked a friend to sing the song at her funeral and she agreed to do so.
Years later, her friend recorded her class singing the song and sent it to Wall.
Wall said this inspired her to do something with the song and her family’s history.
Wall said she met with her old
college friend, Marc Smolowitz, who is an award-winning director and producer, and pitched her idea to him about a documentary exploring how this one song has survived and how it has changed lives.
“Oh mother, my mother dear, where are you, where?”
These lyrics were referring to how Krinski was taken from her mom at an early age.
Wall said her mother was taken by her nanny, Wiktoria Rodziewicz, and she was given a new life.
After taking Krinski, she had the “hidden child” baptized and colored her hair so that she would blend in.
Years later Krinski was reunited with her biological mother.
Jeff Bloodworth, Ph. D., the chair of the department of history and archeology, said he met Wall on an educational tour of Poland.
“It was the most rewarding faculty development experience in terms of teaching, that I ever had those two weeks,” Bloodworth said. “It was just extraordinary – we saw things, we met people, we learned things.”
Bloodworth said to this day this group continues to be friends and when he heard about Wall’s project, he knew he had to have her come to Gannon to speak and share her story.
Bloodworth said Wall’s story fit well with the Surviving and Thriving in Uncertain Times.
“I think knowing about humanity’s cruelty to each other, while hard, it’s always worthwhile to learn about because I think we’re all human and any human can be on either side at any time,” Wall said. “They can find themselves as a perpetrator of violence or the victim of violence and it’s not that fine of a line.
“It’s a valuable lesson to learn about the situations that people find themselves in and how they survived, and I hope that by listening to my story that people think about what side they would be on.”