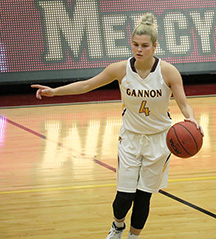 The Gannon University women’s basketball team saw its winning streak reach six games last week before falling to Indiana University of Pennsylvania, 60-45, Saturday at the Kovalchick Complex in Indiana, Pa.
The Knights had extended their string of victories to six on Jan. 31, avenging an earlier one-point loss to Seton Hill on Jan. 8 on Maggie Mitchell’s last-second shot, 61-59, at the McKenna Center in Greensburg.
The split left Gannon with a 13-9 overall record and a 10-6 mark in Pennsylvania State Athletic Conference play going into Wednesday’s 5:30 p.m. meeting with California University of Pennsylvania at the Hammermill Center.
Gannon hung with No. 13-ranked Indiana Saturday until a four-point third quarter by the Knights allowed the Crimson Hawks to pull ahead and take the victory.
Chelsea Rourke paced Gannon with 16 points and nine rebounds. It was the 17th double-digit scoring performance in 22 games this season for the sophomore, who is averaging 11.9 points per game.
Indiana jumped out to a 13-6 advantage in the opening eight minutes before free throws from Nicole LaCava and Sydney Mitchell had the Knights back within 13-9 in the final minute of the first quarter.
Down 15-9, Gannon went on a 10-0 run that was capped by Rourke’s three-pointer shot. The teams traded baskets as halftime hit and IUP led 31-30.
The third quarter did not go well for the Knights as Indiana went on an 8-0 run to take a 39-30 advantage.
Gannon entered the fourth quarter down 11 points, 45-34, but the Knights were still hanging around after Rourke made a pair of free throws with 6 minute remaining. Indiana followed with an 11-4 run over the next four minutes to seal the victory, breaking Gannon’s six-game win streak.
Wednesday’s game against Seton Hill went much better for the Knights, who used Maggie Mitchell’s floating jumper with 2.4 seconds remaining to pull out the win.
It was the third time the Knights had won a game in the final seconds this season.
Mitchell also scored her 1,000th career point on a basket two minutes into the game. Gannon made 38.9 percent of its shots from the field while Seton Hill converted 30.8 percent. On the defensive end, the Knights collected 11 blocks in the game, the most since at least the 2002-03 season.
Gannon trailed 16-11 a minute into the second quarter but outscored the Griffins 26-13 the rest of the quarter to take a 37-29 halftime lead.
Julia Braungart led the way with nine points in the quarter, and Rourke scored five points in the last 20 seconds of the period, including a three-pointer at the buzzer.
At the start of the second half ,Gannon pushed its lead to double-digits, 41-29, after Braungart hit another long-range three. Gannon led 49-41 going into the fourth quarter but the host team would not go away.
The Knights clung to a three-point lead, 57-54, with 1:38 remaining before Jenna Kaufman nailed the equalizer for Seton Hill, tying the game at 57.
Gannon ended with the final possession and a chance to win, so Mitchell dribbled the clock down at the top of the key as LaCava set a screen. Mitchell dribbled left and pulled up at the elbow, burying the jumper with 2.4 seconds left.
Rourke stole the ensuing Griffin inbound pass, depriving Seton Hill of the chance to get off a final shot and leaving Gannon with the victory.
Maggie Mitchell led Gannon with 18 points while Braungart had 16 and Rourke added 12. Lauren Tewes pulled down a team-leading 12 rebounds for the Knights.
Following Wednesday’s game against Cal U, the Knights will visit Edinboro at 1 p.m. Saturday, and then return to the Hammermill Center to host Indiana at 5:30 p.m. Monday.
Both Edinboro and IUP are 14-2 in the PSAC entering play this week.