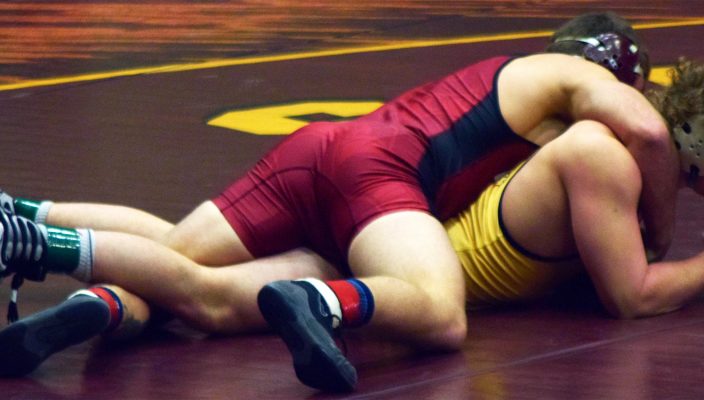 The Gannon University wrestling team is rounding the corner on the season and looking to build as many individual postseason champions as possible.
But before that, the Knights have a few challenges until they make it to the Super Regional One tournament, set for Feb. 23-24 in Johnstown.
After Gannon’s most recent weekend of competition, the team is looking to steamroll the rest of the competition.
On Jan. 30, the Knights didn’t have much of a trip at all as they took on Penn State Behrend, which is resurrecting a program and enjoying plenty of success. But the Lions were no match for Gannon, which posted a 35-19 victory by winning six of 10 matches.
There were many key matchups in the dual, one of which was the Knights’ Connor Day pinning Sam Svetz in overtime at 157 pounds.
Day continues to have an epic freshman season, moving his record to 4-1 in dual action and 21-7 overall.
At 174 pounds, senior Louis Crawford from Meadville took on another local talent in Behrend’s Zach Ishman of Youngsville. Crawford took the pinfall victory early in the second period to push his team to a commanding lead at 35-5.
“I’m really proud of the underclassmen and how they wrestled,” Crawford said later. “It was a good feeling knowing that when we are finished with this program there will be great guys taking our places.”
Next up for the Knights was a date with Shippensburg Friday at the Hammermill Center, and Gannon came away with a 37-10 victory.
Shippensburg came into the Hammermill with the final spot in the Top-25 rankings, but the Knights would make easy work of the Raiders, winning eight of 10 matches.
Seven of the 10 matches featured at least one regionally ranked wrestler. One of the highlights came at the heavyweight spot where Gannon’s Nick Budd — ranked third in the region — pinned seventh-ranked Derek Berberick at the 1-minute mark of the opening round.
Other Gannon winners were Jacob Dunlop at 125 pounds, Carmine Ciotti (141), Eric Lewandowski (157), Jared Sample (165), Jake Stratton (174) and Nick Costa (184). Ciotti and Stratton gained their wins by pin.
On Saturday, four Gannon wrestlers took part in the Edinboro Open, and the Knights’ top performer was freshman Joel Leise, who went 3-2 with two pins at 174 pounds. That was good enough to earn Leise a fourth-place finish.
The Knights will return to action at 7:30 p.m. Friday for Senior Night when Lake Erie College visits the Hammermill Center.
Gannon is also scheduled to compete in the John Carroll Open Sunday before closing out the dual meet portion of the schedule Feb. 14 on the road against rival Mercyhurst.