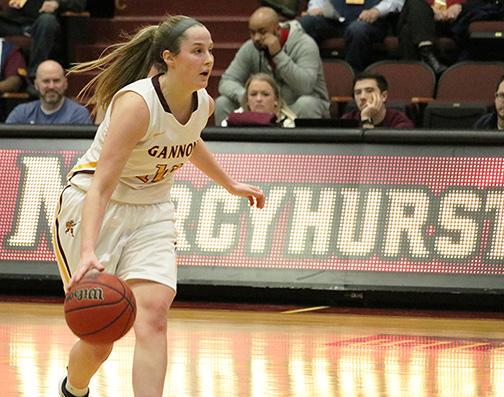 Gannon University’s women’s basketball team continued its winning ways last week, posting a pair of Pennsylvania State Athletic Conference victories over Slippery Rock and Pitt-Johnstown to make it five in a row.
The Knights used Nicole LaCava’s two free throws with three seconds remaining to pull out a 70-68 victory over Slippery Rock Wednesday at Morrow Field House and mauled Pitt-Johnstown, 64-46, Saturday at the Hammermill Center behind Maggie Mitchell’s game-high 24 points.
The pair of wins improved Gannon’s overall record to 12-8 and left the team with a 9-5 PSAC mark going into Wednesday’s 5:30 p.m. matchup at Seton Hill.
Mitchell used an 8-for-15 shooting effort to collect 24 points in the victory over Pitt-Johnstown – the 10th straight time the Knights have tamed the Mountain Cats going back to the 2013-14 season.
Mitchell said she and her cohorts are playing well together, and that’s been the key to the current winning streak.
“From the starting five to the players who come off the bench, everyone is making an impact,” she said.
Gannon shot over 40 percent from the field for the fourth game in a row, making 19-of-43 shots against Pitt-Johnstown.
The Knights led from the beginning of the game, starting with an 8-0 advantage on the way to an 11-6 lead after one quarter. In the second quarter, Gannon built its lead to double digits at 20-10, but the Mountain Cats responded and cut the lead to 25-20 at halftime.
The Knights opened the second half like they did the first with an 8-0 run and outscored the visitors 18-11 to boost their lead to 43-31 heading into the final quarter.
Another 8-0 run at the start of the final quarter put the game out of reach.
Mitchell was the lone player to score in double figures for Gannon, but Chelsea Rourke added eight points and nine rebounds while Julia Braungart contributed six points and five assists. Ruta Vetra added seven rebounds as the Knights outrebounded Pitt-Johnstown, 38-30.
In the win over Slippery Rock, Gannon had a 12-point lead melt away in the final five minutes before LaCava saved the day with her two free throws.
LaCava tallied a team-high 20 points while Braungart recorded a career-high 14 points, connecting on four of five triples. She also dished out a season-high six assists.
The Knights shot 46.5 percent from the field, making 20-of-43 shots.
Gannon took its first lead of the game, 15-14, in the opening 11 seconds of the second quarter with LaCava netting a layup. The Knights went on to build a 38-22 lead just before halftime, completing a massive 30-8 run that spanned a quarter and a half.
Maggie Mitchell began the third quarter with a triple that had Gannon on top, 41-28. Rourke and Mitchell went back and forth scoring for Gannon, as they combined for the first nine points in the quarter.
But Slippery Rock regrouped, and LaCava’s bucket to end the third quarter sent the Knights to the final 10 minutes of play with a 56-48 lead. Gannon expanded its lead to 66-54 but from that point, The Rock began to chip away, reducing Gannon’s lead to single digits, 66-58, with 3:42 remaining.
With only 24 seconds left, Slippery Rock tied the game at 68-68 on Morgan Henderson’s 3-pointer.
That left just enough time for a final play that Gannon coach Jim Brunelli drew up. Mitchell missed the 3-point attempt but LaCava got the rebound and put a shot up with 2.8 seconds remaining, getting fouled in the process.
LaCava went to the line and connected on both free throws, sealing the win for the Knights.
Wednesday’s rematch with Seton Hill will give Gannon a chance to avenge a heartbreaking 79-78 loss to the Griffins on Jan. 8, a game that was decided in the final seconds.
“Wednesday is an opportunity to continue the awesome growth we have made these past weeks,” Mitchell said, “and I know our team is ready for it.”