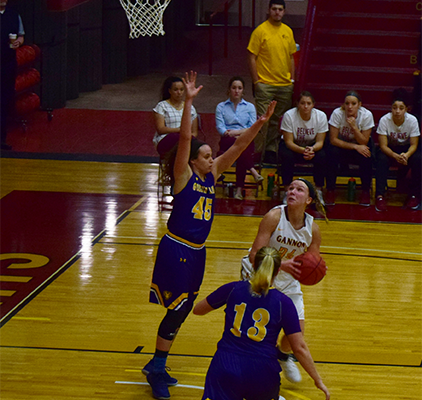 The Gannon University women’s basketball team stretched its modest winning streak to three games with two home victories last week, and the Knights will look to make it four in a row Wednesday on the road against Slippery Rock.
Gannon used an outstanding overall performance to throttle Mercyhurst by 28 points, 85-57, Jan. 17 at the Hammermill Center in the Porreco Pride of Erie Game, and then returned to the court three days later to down Millersville, 65-56, in the annual Pink Zone game.
The victories improved Gannon’s overall record to 10-8 and gave the team a 7-5 mark in Pennsylvania State Athletic Conference action going into Wednesday’s 5:30 p.m. game at Slippery Rock.
Maggie Mitchell was named the Porreco Pride of Erie Game changer with 28 points and nine assists for the Knights in their win over Mercyhurst.
Gannon was on fire in the opening minutes, bolting to a 10-0 lead in just three minutes. The Knights stretched the lead to 17-2 after Sydney Mitchell and Maggie Mitchell went back-to-back from the field.
Mercyhurst got its first basket of the day at the 6:28 mark of the first quarter and closed to within 22-11 by the end of the first quarter.
Five Gannon players scored in the opening quarter, led by Maggie Mitchell’s eight.
Gannon owned its largest lead of the first half, 40-21, as Nicole LaCava connected on a deuce with just 18 seconds remaining.
The third quarter proved to be much of the same as the first half. Gannon continued to pour on the points, starting the second half on a 15-4 run.
At one point, the Knights’ lead ballooned to 30 at 55-25 and Mercyhurst never threatened after that.
Gannon outscored Mercyhurst, 42-24, on points in the paint and 23-8 on points off turnovers. The 28-point victory was the largest of the season.
LaCava’s 20 points and nine rebounds led the Knights in their win over Millersville.
The game began on an 11-2 run capped by Lauren Tewes’ triple near the end of the first quarter.
Sydney Mitchell made two 3-pointers to finish the first period, leaving Gannon with a 17-8 lead.
Through the second period, Millersville went on a 8-0 run to tighten the score to 21-16, but Sydney Mitchell’s 3-pointer to close the first half sent Gannon to the locker room up, 28-20.
Millersville tried to take its first lead of the game in the third quarter, closing to within one point, 29-28. LaCava answered by hitting another bucket to go up, 31-28, at the 6-minute mark.
LaCava tallied 14 of the 16 points Gannon scored in the third quarter, sending Gannon to the fourth quarter with a 44-36 advantage.
Gannon’s lead was back to 10 points with 8:41 remaining in the fourth, but Millersville wasn’t done, as Jade Farquhar made a layup at the 4:31 mark to cut the Knights’ lead to 48-45.
But in the game’s final minute, Gannon went 10-for-10 from the free-throw line to hold on for the win.
In addition to LaCava, two other Knights scored in double figures as Sydney Mitchell and Julia Braungart each finished with 11.
Gannon was precise from the free-throw line, making 21-of-23 to extend their conference-best mark to 78.9 percent.
The Gannon women’s basketball team raised $9,313 as a result of last year’s Pink Zone game and has raised a collective $132,422 to join the fight against breast cancer.
After Wednesday’s game against Slippery Rock, Gannon will return home to host Pitt-Johnstown at 1 p.m. Saturday at the Hammermill Center.