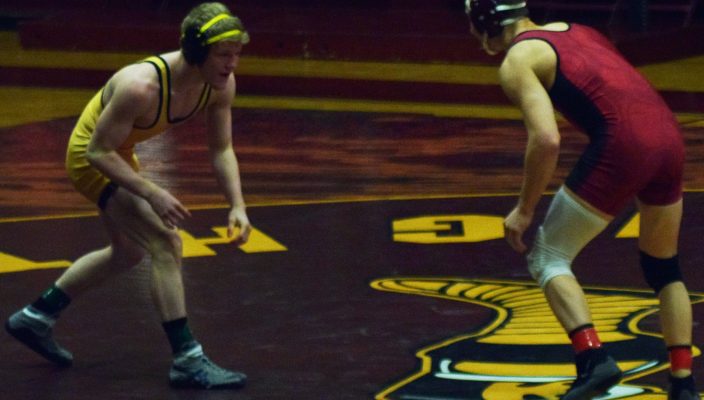 Wrestling still above .500 after loss to Seton Hill

Wrestling season is in full swing and during the past month, Gannon University wrestling has been both successful and entertaining.
Going in chronological order, over a month ago the team competed as individuals in the Pennsylvania State Athletic Conference Championships held at Edinboro University.
The Knights finished with 57 team points, good for sixth place, and five wrestlers claimed spots on the podium. The highest finish for Gannon that weekend would be redshirt junior Nick Costa, who claimed the third-place medal at 184 pounds.
Over the next month the team would spend most of its time in the wrestling room training, traveling home to spend time with their loved ones and coming back to campus to continue practices.
Next up was the National Wrestling Coaches Association National Duals being held in Fort Wayne, Ind., starting Jan. 4. On the first day of wrestling, Gannon’s Don Henry would earn his 200th career win as a coach with the team’s first match victory against California Baptist, 24-13.
This is a huge achievement in this sport, especially when you must remember how many matches happen each season. Henry has been with Gannon for 34 years and has a long list of accomplishments that would make this article take up a full page.
This win was also incredibly special when putting into perspective that Cal Baptist was the fourth seed going in and Gannon was seeded 18th.
In their next match that day, the Knights would claim another win, 24-15, over a familiar opponent in Wheeling Jesuit. Gannon would wrestle a combined 20 matches that day and would come out on top in 13 of them.
The second day would come with some controversies in the Knights’ first match against fellow PSAC team Seton Hill. The teams would go back and forth, staying very close in the team score throughout. It would come down to the heavyweight matchup where Gannon All-American Nick Budd would get a decision win for the team to tie the score at 18-18. However, Seton Hill advanced via tiebreaker rules.
This would send Gannon to the matchup for third place, where the Knights would take on Nebraska-Kearney. After a hard-fought battle by both teams, Gannon would fall short with its adjusted lineup, 34-12.
With the fourth-place finish, the Knights have officially made their mark as one of the most successful wrestling teams Gannon has had, depending on the rest of the season. A definite mention must go to freshman 133-pounder Austin Hertel, who went undefeated for the weekend.
In a rematch with Seton Hill Saturday, the match had the same intensity and back and forth action as their first meeting.
Gannon hit a few unwanted bumps, such as Nate Ross sustaining an injury at the beginning of overtime. Ross would finish out the match to keep the team from giving up the forfeit, but the Knights still came up short in a 22-20 loss.
Earning wins for Gannon were Jacob Dunlop at 125 pounds, George McGuire at 157, Costa at 184 and Budd at heavyweight.
Looking forward, the team will have many away matches coming up. This weekend the Knights will be looking to take down two different PSAC opponents.
First, Gannon will travel to meet East Stroudsburg on Friday, then head to Kutztown Saturday. The Knights will not be back in Erie to wrestle until the end of the month.