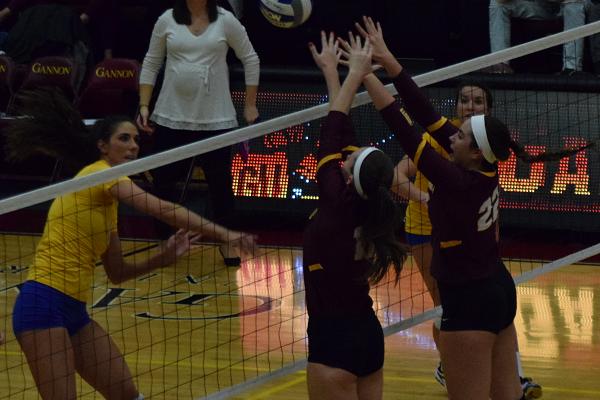 The underdog Knights, who have gone from Pennsylvania State Athletic Conference Tournament runner-up to Atlantic Regional Champions to Final Four contenders, won its first set against Regis, 25-20, took the second, 28-26 and wrapped up the match with a 25-17 win in the final set.

The Knights’ victory gave them a berth in the Final Four, where No. 7-seed Gannon is slated to play No. 3-seed Florida Southern at 6:30 p.m. Friday in Pensacola, Fla.

Gannon will take a 32-6 record into Friday’s match. Only three other teams in school history have compiled more wins in a season.

Following a birthday victory against Regis, senior Sara Crandall said the experience in Pensacola has been awesome and that everyone is enjoying the high level of competition and playing teams outside of their region.

She also credited Gannon coach Matt Darling with getting her and her teammates prepared.

“Our coach has been coming up with great game plans and as a team we’ve executed great so far,” Crandall said. “We look forward to playing Florida Southern.”

Set one was nothing short than a battle for the two teams as they were tied 13-13 before freshman Ashley Kerestes attacked with a “Kerestes Kill” to start a 4-0 run, which put the Knights up 17-13.

After the Rangers countered with two consecutive points to put the set at17-15, Gannon rebounded with another three points, which included a deadly Kerestes Kill. Senior Kelsey Ansec closed out the set as the Knights won 25-20.

Regis jumped out to a 6-2 lead in the second set and at the midway point of the set the Rangers had a 15-10 edge. Things became frantic as Regis knocked on the door of victory with a 23-18 lead.

Refusing to give up, Gannon redshirt senior Rebekah Smith came up with a big kill to catalyze the Knights’ comeback.

Sophomore Ally Smith picked up the reins from Smith as she tallied back-to-back kills, putting the score at 23-20. Regis freshman Caitlyn Burroway put the game within reach for the Rangers, scoring to make it 24-20.

But Gannon capitalized on three Regis errors to pull within one point at 24-23. Ansec tied the game with a kill, and the teams continued to battle it out.

The time to shine for the Knights came as freshman Ashley Beyers delivered an ace of a serve to win the second set, 28-26.

The third and final set began with a 9-4 lead in favor of Gannon after a service ace from senior Maggie Wilhelm. A couple of Ansec kills and two points from the Rangers put the match at 14-6 in favor of the Knights.

Regis found some energy and went on a 6-2 run to make the game close at 16-12, still in favor of Gannon.

But the Knights kept their foot on the gas and the Rangers couldn’t catch up as Gannon outscored Regis 9-5 and won the match 25-17.

Ansec led the team with 17 kills, Beyers led in assists with 28 while sophomore Toni Leitshuh had a team-high of 12 digs and Ally Smith recorded her 15th double-double with 11 kills and 11 digs.

This year marks the ninth time a Gannon volleyball team has qualified for an NCAA tournament appearance with Darling as coach.

The game between the Knights and Florida Southern can be watched at gannonsports.com under volleyball’s schedule tab.

« Goodbye to some, good luck to all Volleyball concludes historic season in NCAA Semifinals »