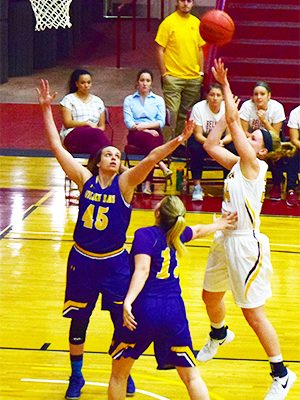 The Gannon University women’s basketball team suffered its first Pennsylvania State Athletic Conference loss of the season over the weekend during a two-game road trip.
On Saturday, the Knights extended their PSAC win streak to three games by beating Shippensburg, 69-60, but on Sunday, Gannon fell in the final moments, 65-59, to Kutztown.
The split left the Knights with an overall record of 5-4 and a 3-1 PSAC mark going into Saturday’s 1 p.m. PSAC matchup with East Stroudsburg at the Hammermill Center.
Maggie Mitchell poured in 26 points to lead Gannon in its loss to Kutztown, making it the third consecutive game she’s scored over 20 points.
A pair of Mitchell free throws enabled the Knights to pull into a 59-59 tie with 1 minute, 22 seconds to play, but Kutztown’s Keifonna Ferguson converted go-ahead free throws with 1:09 remaining, and the Bears hit four more free throws in the last 12 seconds to wrap up the win.
The early going looked promising for Gannon, as the Knights led 13-7 after one quarter, and they used an 8-0 run to create more distance between them and the Golden Bears, leading by 10 at halftime, 29-19.
Kutztown began its comeback in the third quarter, outscoring Gannon 13-2 in the opening seven minutes and vaulting to a 40-37 lead.
But the Knights did not give up, fighting back to take a 50-48 lead on a Mitchell three-pointer and two free throws by Chelsea Rourke before Kutztown eventually put the game away.
In addition to Mitchell’s 26 points, Rourke added 15 for the Knights, who shot 35 percent from the floor but turned the ball over 23 times to Kutztown’s 14.
Gannon also got off to a hot start in Saturday’s win, finishing the first quarter with a 14-5 edge thanks in part to Rourke’s six points.
Shippensburg inched back to within one point, 14-13, halfway through the second quarter, but Rourke gave Gannon its largest lead of the half at 27-18 with a three-pointer at the 1:20 mark.
The Knights went into halftime with an eight-point lead at 29-21, thanks in part to shooting 12-of-28 from the field while Shippensburg was 8-for-28.
Gannon’s lead hit double-digits, 47-37, in the second half with a Julia Braungart layup. The Knights had a 45-38 lead headed to the fourth quarter.
Shippensburg responded and cut the lead three points after an Ariel Jones three-pointer, 52-49, at the 6:17 mark of the fourth quarter. Mitchell hit the Raiders back 20 seconds later with a long-range shot that put Gannon back up by six, 55-49. Shippensburg never got closer than six as Gannon outscored the Raiders, 17-11, over the final six minutes.
Gannon sealed the game with eight free throws in the final minute of play. The Knights also had a season-low 12 turnovers in the game. Gannon was 8-of-23 from long range, marking the fifth straight game with at least eight threes. Sydney Mitchell led the Knights on the boards, grabbing a season-high six rebounds.
Following Saturday’s matchup with East Stroudsburg, the Knights will meet Wheeling Jesuit in a nonconference game in Wheeling on Dec. 16, and they will return to PSAC action when Indiana University of Pennsylvania visits the Hammermill Center on Dec. 30.