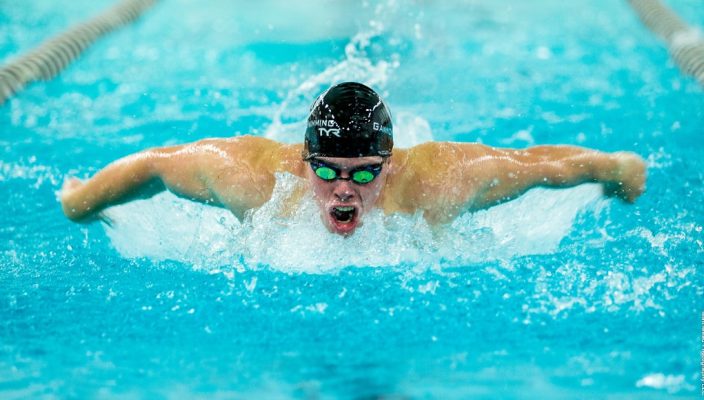 The Gannon University men’s and women’s swim teams traveled to Wooster, Ohio, over the weekend for the Wooster Invitational, and both squads wound up with impressive third-place finishes.
The Gannon men’s team compiled 1,224 points while winner Case Western Reserve had 1,899 and runner-up Westminster totaled 1,248.5.
The Gannon women wound up with 1,237 points to place behind winner Case Western Reserve, which totaled 1,984.5 points, and host College of Wooster, which tallied 1,370 points.
The Knights’ men’s team has been off to a great start to its season, coming into this meet 4-1. The women’s team also has been performing well, posting a positive record of 3-2.
Eleven teams came to compete in the women’s meet. Gannon’s 200-yard freestyle relay and 400-yard medley relay teams both placed second to highlight the opening day.
Celia Kottakis, Ashley Rega, Courteney Hubert and Silvija Taraska made up the 200 freestyle relay team while Taraska joined Samantha Favret, Brynn Driscoll and Meghan Terwilliger on the 400 medley relay group.
Driscoll also finished third in the 200 individual medley while Jillian Pritchard was third in the 500 freestyle and Taraska placed third in the 50 freestyle.
On the men’s side, Clark Eason won the 50 freestyle event while the 200 freestyle relay team of Maciej Skrzypczak, Allan Collins, Michael Weiser and Eason placed second.
On Day 2, Terwilliger notched the only first-place finish for the women’s team, winning the 100 butterfly for the fourth time this season.
The 200 medley relay team of Terwilliger, Favret, Driscoll and Taraska placed third while Lauren Clifford took second in the 1-meter diving.
Skrzypczak, after a great performance against Clarion in a dual meet, brought home the gold in the 100 backstroke for the second time this season and also played a crucial role in helping the men’s 200 medley relay team to a second-place finish. He was joined by Luke Engel, Eric Booth and Eason. The 800 freestyle relay team of Collins, Bryce Ebel, Engel and Thomas Marshall placed third while Skrzypczak, Eason, Engel and Booth were runners-up in the 200 medley relay.
On the final day of competition, Terwilliger and Kottakis each claimed an individual victory, with Terwilliger taking the gold in the 200 butterfly and Kottakis the 100 freestyle.
Favret placed third in the 200 backstroke while the 400 freestyle relay team of Rega, Taraska, Hubert and Kottakis finished second.
The final day’s highlight for the men was a first-place effort by the 400 freestyle relay team, which consisted of Weiser, Engel, Eason and Marshall.
Collins also placed second in the 200 backstroke and Marshall finished third in the 100 freestyle.
Pritchard said she was pleased with the team’s performance in Wooster.
“Things went very well,” she said. “There were best times from several swimmers, multiple first-place finishes and the relays really stepped up against competitors.
“Now we are getting ready for the second half of the season focusing on PSAC championships.”
Both the men’s and women’s teams resume their season after the semester break when they host Shippensburg at 4 p.m. Friday, Jan. 12.