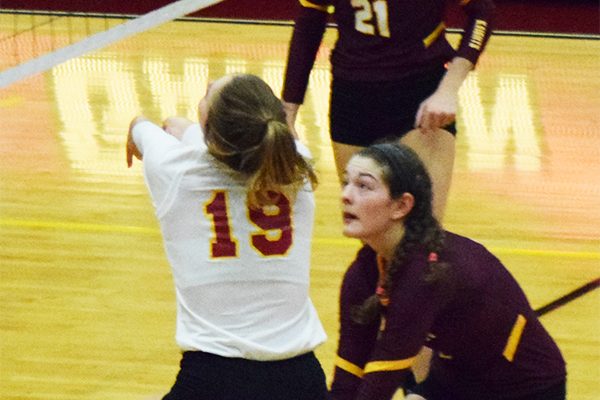 The Gannon University volleyball team advanced to the NCAA Division II Elite Eight tournament by defeating Pennsylvania State Athletic Conference rival University of Pittsburgh at Johnstown and 24th-ranked Wheeling Jesuit in the Atlantic Regional Tournament, held over the weekend in Wheeling, W. Va.
This marks the Knights’ fourth visit to the NCAA Elite Eight in program history and first since 1993, when the team capped a run of three consecutive Elite Eight appearances from 1991-93.
Gannon received a No. 7 seed after all eight teams were reseeded and will play Regis University of Colorado Springs, Colo., at 3:30 p.m. Thursday in Pensacola, Fla.
Coach Matt Darling alluded to the potential distractions Florida brings, but is confident they can manage them.
“We can’t act like tourists when what is needed is for us to act like competitors trying to win a championship,” he said.
On Friday, the Knights faced off against Pitt-Johnstown in a rematch of the five-set PSAC title match played on Nov. 18 at the Hammermill Center. UPJ prevailed in the PSAC Tournament but this time the Knights got their revenge, winning in four sets, 25-14, 22-25, 25-17, 25-23.
Gannon started out hot, jumping to a 6-1 lead to open the first set. Pitt-Johnstown rallied back to cut the lead to 9-8 before Gannon went on a 10-0 run sparked by four Kelsey Ansec kills and cruised to a 25-14 set victory.
Pitt-Johnstown edged Gannon in set two, 25-22, for its only set win of the match. The Knights would bounce back fast issuing an 8-2 run after jumping to an 11-10 lead to extend their lead to 19-12. Gannon closed out the set with a kill from Ashley Kerestes, winning the set, 25-17.
The fourth set was neck-and-neck to a 9-9 tie before Kerestes sparked a 7-2 run with a kill, giving the Knights a 16-11 lead.
The Mountain Cats rallied back with an 8-2 run of their own to take the lead, 19-18. But Ally Smith and Ashley Beyers kills gave Gannon the lead for good and the Knights won the set, 25-23, and overall match.
Ansec led Gannon with a match-high 24 kills, tying a career-high.
Ally Smith picked up her team-leading 14th double-double of the season, recording 18 kills and 17 digs
The next day, Gannon stunned No. 24 Wheeling Jesuit with a 3-0 sweep to win the regional, 25-20, 25-14, 25-17. The victory came in the Knights’ second Sweet Sixteen appearance in three years, and their ninth consecutive NCAA Tournament appearance.
Darling said the win brings an extra sense of excitement for the future of the program.
“We get to see some of the very best teams in the country at the D-II level, and that will help our program grow,” he said.
The win ended Wheeling Jesuit’s streak of 26 consecutive set wins in Atlantic Regional play dating back to 2014. The Cardinals had won 20 straight NCAA Atlantic Regional matches overall dating back to 2010 with six consecutive regional titles.
In the opening set, Gannon showed its strength early, snapping a 2-2 tie with an 8-2 run. Wheeling Jesuit would respond, cutting the deficit to just three at 14-11.
Gannon answered as well with five straight points to take a commanding 19-11 lead.
Wheeling Jesuit would climb back within 23-20, but consecutive Knight blocks secured a 25-20 victory in the first set.
An even second set early on saw Gannon slowly pull away midway through the set.
With a 12-8 lead, Gannon sparked a mini 4-0 run with kills from Rebekah Smith and Ally Smith to get the lead to 16-8. The Cardinals were never able to get closer than six points the rest of the way.
In set three, Gannon remained hot, winning the first three points.
Wheeling Jesuit fought for its life, creating ties at five, six and eight before garnering its first lead of the evening at 12-9. The Cardinals maintained a lead at 15-12 before Gannon broke a 16-all tie with a 7-0 run on its way to scoring nine of the final 10 points to win the match.
Darling believes that although a five-set win would have been a confidence booster, winning in straight sets is a good sign for things to come.
“It definitely gives us a sense that we’re playing our best volleyball of the year right now,” he said. “I think we are all excited about the opportunity.”
Ally Smith was the only Knight with double-digit kills, producing 13.
Freshman Ashley Beyers dished out 36 of Gannon’s 41 assists on her way to her fourth consecutive double-double and sixth overall.
The win marked the first time the Knights had won 31 matches in consecutive seasons.
MATTHEW FASSNACHT
fassnach001@knights.gannon.edu