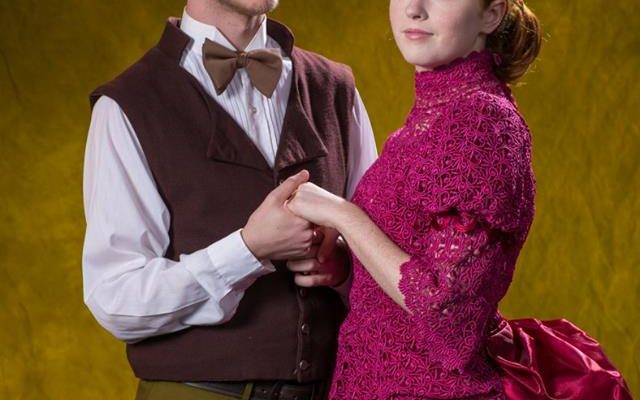 Dolls come to life at Schuster

The first time I saw “A Doll’s House” was last Monday, three days before opening night.
The cast did not have a chance to rehearse over break. It was their first rehearsal back and it was interesting.
They all knew their characters and they were confident in themselves, but there was hesitation in connecting with fellow actors. They seemed closed off in a box.
Megan Hamm, a senior theatre and communication arts major talked about the show last Tuesday. She explained that the distance was intentional.
The world of the play is fake and so are the people and their interactions. It made sense. I understood the direction of the play and wanted to see it again.
The second time I saw the play was on Wednesday’s preview.
I was surprised by how much the actors progressed over such a short period of time. They were much better. Their timing was perfect, the delivery was flawless and each actor was there, present in the moment.
Acting is a dance between two or more actors. They have to listen to each other and respond to what their partner is giving. It’s not a rogue game. It’s a collaboration.
The first time I heard about “A Doll’s House” was during my sophomore year, in Carol Hayes’ drama class.
Back then, I didn’t read the play because I found it to be boring and old. It didn’t make sense. I had a hard time connecting with the characters.
It was during that semester that my love for theater was ignited. And since then, I’ve come to understand that plays must be seen in order to be understood.
Watching this play made it very clear. It was a powerful message. It is a story of awakening and creating an identity.
So many people put on masks and live in them their whole life. Nora, the lead, teaches us to take off these masks and reveal our true self to the world.
It might not be easy. I think it’s never easy. But good things always take a toll. In a time when people are afraid to be themselves, this play speaks directly to the audience to let go of that fear. Let go. Be brave. Be bold.
The cast was wonderful. As student artists, they’ve improved by leaps and bounds.
Isn’t that the true purpose of college theater: to educate, to develop, to learn?
Seamus Clerkin, a sophomore dual major in theatre and education, was particularly fun to watch.
He plays a character twice his age, in a style he is not used to.
I think he transformed more than anyone to become Torvald, and I salute him.
Alaina Manchester’s direction has guided the cast to work together, to depend on each other, to listen and respond.
The central scenes between Nora and Torvald are intimate and powerful. If you don’t enjoy the whole story, you will definitely love those final scenes.

The entire play is a dance between Nora and the other characters that builds up to the climax when Nora becomes free.
Hamm must earn this scene. She must work hard to take the stage. It is a breathtaking transformation. Her performance deserves a standing ovation.
Her character’s dialogue speaks to everyone, especially the frightened, doubtful college student. Nora is an inspiration to push to boundaries.
If you missed the show last week, there will be three more opportunities to see it this week.
Performances will be at 8 p.m. Thursday through Saturday at the Schuster Theatre. I would strongly recommend reserving your tickets online at www.gannon.edu/schustertheatre.
General admission is $7. Admission for Gannon faculty, staff and students is $5 with a current Gannon ID.
Take the time to see the show. The stage is brilliant and grand. It will surely take your breath away.
Allow yourself to be transported into a world that will inspire you to be better.