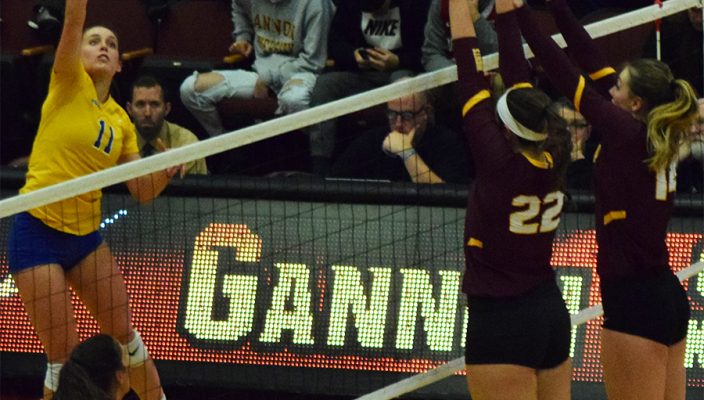 The Gannon University volleyball team cruised into the Pennsylvania State Athletic Conference (PSAC) championship match but fell in a heartbreaker to the University of Pittsburgh at Johnstown (UPJ) on Nov. 18.
Still, the Knights’ overall performance on the year, highlighted by a 28-6 overall record, landed them a No. 2 seed in the NCAA Division II Atlantic Regional Tournament.
There, Gannon will open play at 2:30 p.m. Thursday against seventh-seeded Shippensburg at Wheeling Jesuit University.
Should Gannon prevail in its opening match, it could wind up in a rematch with No. 3 seed Pitt-Johnstown, which takes on Seton Hill, the No. 6 seed, in another first-round contest.
Gannon reached the PSAC Championship match after a 3-0 sweep of West Chester, 25-20, 26-24, 25-16. But in the finals, Pitt-Johnstown came up a winner, 17-25, 23-25, 25-21, 25-12, 15-13.
This marked the second straight year the two teams met for the PSAC title; in 2016, Gannon swept the Mountain Cats, 3-0.
The Knights rolled in the first set, 25-17, and saw themselves down late in the second, 22-17, but rallied on an 8-1 run to capture a 25-23 victory.
In the third set, Pitt-Johnstown was able to edge out a 25-21 win and prevailed in the fourth set, 25-12.
In the fifth-set thriller, Gannon led 8-7 before flipping the court.
The pause allowed Pitt-Johnstown to score five of the next seven points to take a 13-10 lead. Toni Leitshuh and Rebekah Smith recorded back-to-back clutch kills to close within 13-12.
The two teams traded points before a Noelle Carota kill stole a 15-13 victory.
Gannon was led in scoring by Kelsey Ansec, who had 16 kills and four blocks.
Ally Smith was the only other Knight with double-digit kills, collecting 14 kills and 22 digs – her 12th double-double of the season.
In the semifinal game, Gannon needed just three sets to get past West Chester.
Ally Smith led Gannon with 10 digs and 13 kills. Sara Crandall added another 20-plus dig match – with 24 – to bring the tally to 24 on the season; she also added two service aces.
Ansec added 12 digs of her own and was one of two to reach double-digits. Maggie Wilhelm converted six kills on nine attempts, and Ashley Beyers issued 37 assists.
This week will mark the ninth consecutive NCAA Tournament appearance for the Knights under coach Matt Darling.
Wheeling Jesuit received the top seed for the seventh consecutive season, followed by Gannon, Pitt-Johnstown, Indiana (Pa.), West Chester, Seton Hill, Shippensburg and Winston-Salem state.
Gannon lost in five sets to Shippensburg back on Sept. 22, 25-23, 25-22, 22-25, 23-25, 26-18.
The Raiders, who finished 13-5 in PSAC play, bring an overall record of 21-11 into Thursday’s match.