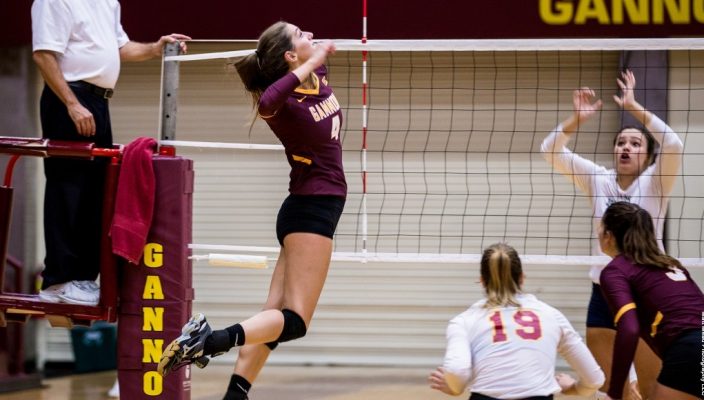 The Gannon University volleyball team wrapped up the Pennsylvania State Athletic Conference (PSAC) Northwest Division over the weekend, beating West Chester Friday and clinching with a win against Cheyney University the following day.
The Knights took the first match of the weekend over the Southeast Division leaders, 25-18, 17-25, 26-24, 25-18. On Saturday, Gannon swept winless Cheyney, 25-10, 25-12, 25-14.
On Tuesday night, the Knights beat crosstown rival Mercyhurst, 25-19, 25-18, 25-10, at the Lakers’ gym. The win puts Gannon at 24-5 overall and 13-3 in PSAC play.
In game one Friday, Kelsey Ansec led the Knights with 17 kills. She continued her stay at the top of the scoresheet as Gannon’s top killer with double-digit kills in the last eight matches; she has since boosted her career kills total to 1,039.
Ansec spoke on her — and the Knights’ — recent success, and noted that Gannon coach Matt Darling had recently changed the team’s practices.
“I believe it’s been very beneficial to us and contributed to how we play,” she said.
“We have a very different team this year, and he’s done a great job of accommodating our diversities.”
Sara Crandall also showed up with her second 30-dig match of the season and did so in consecutive games. Crandall recorded a season-high 33 digs against East Stroudsburg on Oct. 28, and followed it with a 30-dig performance at West Chester.
Ally Smith put together her eighth double-double of the season, collecting 14 kills and 15 digs, her first since Oct. 7 against Clarion.
Ashley Beyers led Gannon with a season-high 38 assists while registering season-highs with eight points, five kills and two blocks.
The following day, the Knights took their 9-0 all-time record against Cheyney and made quick work of the winless Lady Wolves in straight sets while clinching a berth in the 2017 PSAC Tournament.
It will mark the ninth straight year that Gannon has advanced to the PSAC Tournament.
Toni Leitshuh added her eighth double-digit kill performance of the season with 10 to bring her season total to 171.
Aubree Lanman added another to the list of Knights tallying career highs over the weekend with seven kills of her own across two sets; she also issued an assist and service ace on the day.
Beyers, Jordan Talevski and Lexi Johnson continued with the weekend’s theme dishing out eight, six and four service aces respectively – all career highs. Gannon totaled 23 service aces as a team.
The Knights, who are positioned third in the latest NCAA Atlantic Regional Rankings, return to action at 7 p.m. Friday against Slippery Rock at the Hammermill Center. Edinboro then visits Gannon for a 2 p.m. match Saturday.
Ansec later added her thoughts on this weekend being the last of conference play. “We take our schedule one day at a time so I’m not necessarily looking in the future,” she said.
“It’s exciting to realize that we are about a week away from tournament play because that means we are getting closer to achieving our goals.”