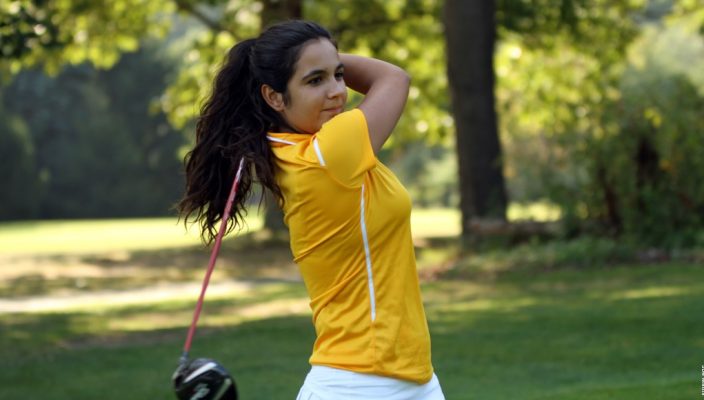 It was a PSAC Championship weekend for the Gannon University men’s and women’s golf teams. Both teams traveled to Hershey Country Club in Hershey for a weekend-long tournament.
The men’s team came back from sixth place after day one and finished the tournament fifth among eight teams. The women’s team finished fifth out the eight teams, slipping one spot from fourth at the end of the first day.
Indiana University of Pennsylvania won the men’s championship with a score of 593, and IUP senior Josh Bartley won the individual title shooting a 139 over the two days of play.
Gannon had a total score of 625, and senior Matt Barto placed eighth and had the lowest total score for the Knights, shooting 151.
On top of recording his fourth top-10 finish of the fall and placing eighth among 40 golfers, Barto was also named PSAC Men’s Golf Champion Scholar for the second year in a row.
Barto, a mechanical engineering major, earned this title by having the top GPA at the championship this weekend with a 3.891 GPA.
Officials rounded it to three decimal places because Barto was close to tying with IUP senior Mike Hoare.
Behind Barto were sophomore Jordan Henry and freshman Mark Majewski, who tied for 21st by shooting a 157 over two rounds. Freshman Ethan Bennet placed 25th at 160, and junior Billy Colbert placed 27th at 161.
Barto thought the match was rough for himself and the team.
“The golf course was really hard, and some of us got tired at the end of our rounds, both mentally and physically,” Barto said.
On the women’s side, Kutztown took the win with a total score of 638 over the two days. West Chester placed second with a score of 640, Mercyhurst finished third with 652, Millersville placed fourth with 653 and Gannon took fifth with a score of 654.
Senior Cai Yan Ho of California University of Pennsylvania won medalist honors with a two-day total of 148.
Sophomore Carley Sawyer and senior Manuela Quevedo led Gannon with scores of 161, good enough for a tie for 10th place.
Junior Cristina del Diego took 17th with a score of 165 in her first PSAC Championship match with Gannon.
Del Diego transferred to Gannon this year from Pfeiffer Univrsity in North Carolina.
“It is always scary to go to a new place where you do not know anyone and the language they speak is not your mother tongue,” del Diego said.
“My coach, Scott Stanno, and the assistant coach, Joe Mattis, had helped me to adapt to the team, and they helped a lot whenever I struggled with my game and remaining positive toward the game, which is the main thing to play golf. However, they did it without putting any pressure on me.”
Despite having a rough round early in the season that shook her confidence for the season, del Diego felt she did well at the PSACs.
“As a junior, it was not my first time playing in a conference tournament so I was not really nervous, but I was more upset because I was not able to get the results I would have liked during the season,” she said. “I was not confident with my swing, and more than nervous I was scared. I put too much pressure on myself because I wanted to win my first PSAC Championship this year, and we had the quality as a team to do it again.”
The tournament brings an end to the 2017 schedules for both the men’s and women’s teams.
After learning about last season’s achievements, del Diego thought that the team should have done better this year.
“I felt we should work harder for the following season and the next year in order to try to repeat them,” del Diego said.
Del Diego thought everyone could have played better at PSACs.
“That is the hard part of golf — you can have a really good round one day, and just the next day have the worst round of your life,” del Diego said.
Overall, Barto said he thought the season went pretty well, but not like he expected.
“I figured both individually and team-wise we would be doing better consistently,” Barto said. “I know my scores were not as low during tournament play as they were during casual rounds, and that’s frustrating.”