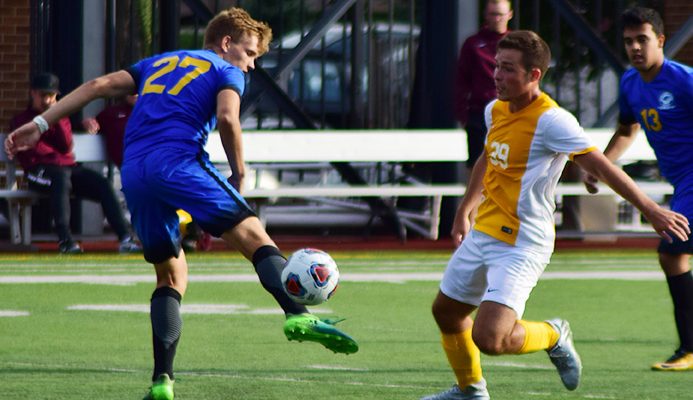 The Gannon University men’s soccer team collected two more victories last week, blanking both opponents and improving to 9-6-1 overall on the season.
The Knights defeated Salem International, 2-0, in a nonconference game Wednesday and edged Lock Haven, 1-0, Saturday in a Pennsylvania State Athletic Conference Senior Night matchup at McConnell Family Stadium.
Gannon now stands at 7-2-1 in PSAC play and in third place going into its final conference match of the season at 5 p.m. Saturday at second-place Millersville.
That will be the Knights’ final test before PSAC Tournament competition gets under way Tuesday.
Gannon’s offensive pursuit lay dormant at the start of its match with Salem International until senior midfielder Sergio Kobowane booted the first shot wide of the net 18 minutes into play.
Continuing to take stabs at the Tiger defense, Gannon finally broke through in the 40th minute with a tipped-in goal by midfielder Eduardo de Bonis Encinoso — marking his fourth goal of the season.
The Knights took their 1-0 lead to the locker room, coming out for the second half with plenty of confidence. Four minutes in, Luis Driemel notched his second goal of the season, putting the Knights safely on top, 2-0.
Manuel Mangu blocked seven of Salem’s shots as he defended the Gannon net perfectly for the remainder of the match. The Knights outshot the Tigers, 10-9, and finished the match with their second nonconference victory of the season.
Saturday’s victory over Lock Haven made for a very successful Senior Night.
Leading scorer Mathias Krigbaum began penetrating the Eagle defense with the match’s first shot in the seventh minute. Krigbaum’s first attempt along with the following three shots of the half all flew far of the net, and Lock Haven had similar results on its seven shots.
Coming out in the second half, both teams remained scoreless until the 69th minute of play when Gannon found the game-winning opportunity off Srdjan Dujkovic’s free kick. The kick sailed into the box, onto the foot of Driemel and he then launched it into the back corner of the net.
Lock Haven couldn’t find a way to equalize the 1-0 deficit, showing obvious frustration on Chase Tackett’s back-to-back yellow cards.
Krigbaum and Encinoso tied at a team-high three shots, although the Eagles still outshot the Knights, 11-8.
Driemel played exceptionally this week with one goal in each match. Afterward, he said he dedicated those goals to his mother and sister visiting from Germany last week.
Beyond personal accolades and family support, Driemel said he believes that the collective defensive effort has been crucial to the Knights’ success, as they’ve allowed only two goals in the past five games.
Gannon senior goalkeeper Jorge Hernandez ended his final regular-season home match with a shutout and a career 71.7 save percentage since 2015. Gannon has shut out six opponents this season with Hernandez in net for five of these matches.
Going into the final conference match, unbeaten West Chester holds down the No. 1 seed with 30 points. Millersville is in second place with 24 points, two in front of Gannon and three in front of both Mercyhurst and East Stroudsburg.
If Gannon can grab the No. 2 seed, the Knights would bypass the quarterfinals and advance to the semifinals. Otherwise, Gannon would be in action during quarterfinal-round play Tuesday at a site and time to be determined.