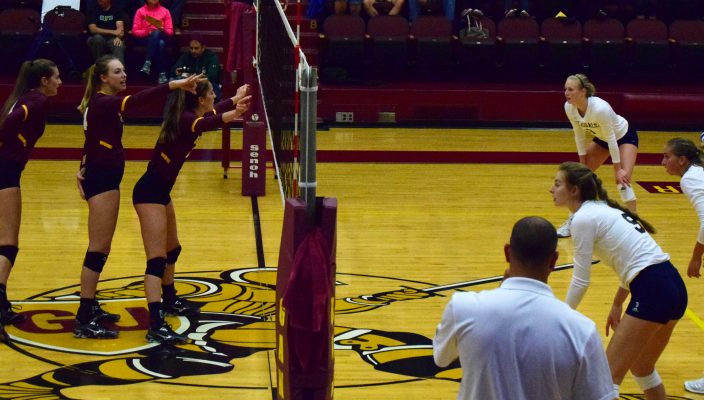 In its first meeting with the University of Pittsburgh-Johnstown since last year’s Pennsylvania State Athletic Conference Championship title match, the Gannon University volleyball team proved it hasn’t lost its step and is here to defend its crown.
Last year’s title match took just three sets to crown the Knights champions, but Friday’s match at the Hammermill Center took four for Gannon to prevail, 25-21, 31-29, 21-25, 25-20.
Gannon came back firing the next day, winning its third straight PSAC contest by sweeping Lock Haven, 25-20, 25-20, 25-15.
The twin victories boosted the Knights’ overall record to 13-3 and left them 3-1 in PSAC play going into this weekend’s Homecoming matchups against Indiana University of Pennsylvania and Clarion University at the Hammermill Center.
In the first game, Gannon and Pitt-Johnstown were tied at three early on before the Mountain Cats jumped out to a 7-1 run to extend the lead to 10-4. After a timeout, Gannon responded with a 10-2 run of its own to take the lead, 14-12. Gannon would close out the set with kills from Kelsey Ansec and Maggie Wilhelm to claim a 25-21 win.
Set two began with Pitt-Johnstown taking a 9-6 lead, but the Knights would bounce back again. Ally Smith started a mini-run, scoring five-of-six points to give Gannon an 11-10 lead. The tight battle extended beyond the standard 25-point set before two Knight blocks ended the set, 31-29.
The third set started in similar fashion with the Mountain Cats bursting out early to a 9-1 lead. Gannon chipped away with the help of two Lexi Johnson kills before taking a 16-15 lead. But the Knights couldn’t hold on as Pitt-Johnstown took the third set, 25-21.
The fourth set went back-and-forth as the Mountain Cats took a two-point lead before Gannon swung back to regain the lead 11-9. Carolyn Knollman topped her career-high with 56 assists in the match — including seven straight — pushing the Knights to a 20-13 lead before finishing off Pitt-Johnstown with a 25-20 set victory.
In the match against Lock Haven, Gannon started the first set with four straight points. Two Toni Leitshuh kills helped the Knights push out to an 8-3 lead before rolling to a 25-20 victory.
Ally Smith began set two with a block to spur an eventual 16-7 lead. The Bald Eagles bounced back to cut the lead to 18-14,before a timeout allowed the Knights to regroup and work their way to another 25-20 set win.
Set three began with multiple kills from Ally Smith and Leitshuh to give Gannon a 9-7 lead before Lock Haven rallied back to take a 14-13 lead. The Knights then went on a 10-0 run to cruise to a 25-15 win.
Ally Smith and Leitshuh each recorded double-doubles while Knollman led the Knights with 23 assists.
Friday’s matchup with IUP will begin at 7 p.m. at the Hammermill Center and Clarion will visit the Knights’ gym at 2 p.m. Saturday.