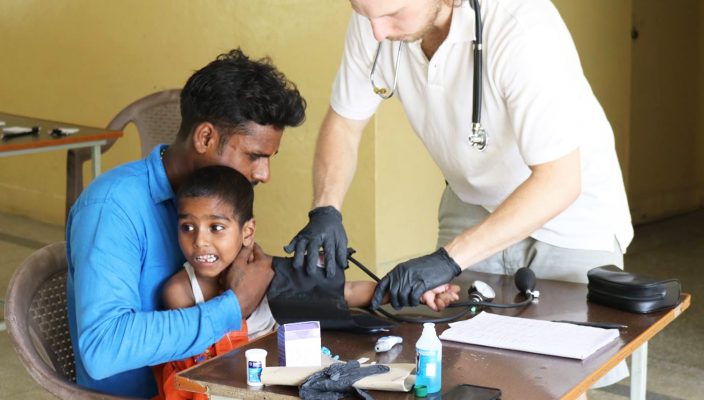 Udai Singh, Ph.D., a professor in Gannon University’s mechanical engineering department, and his family recently celebrated 25 years of providing health care to the poor at their charity’s main facility in their home village of Gagaha, in the nation of India.
The Shankar Service Foundation was founded in 1988 in Erie by Singh’s family with help from the Sisters of St. Joseph of Northwestern Pennsylvania.
Not only has the foundation provided health care to the impoverished in India since 1992, but as of 2003 it has also provided free education for the children of Gagaha, where the average income per family is $150 per year.
Since the foundation’s creation, several members of Singh’s family have helped manage it. They have hosted physicians from Erie, Rochester, N.Y., and other surrounding areas who travel to donate their services at one of the foundation’s health clinics.

For the past 17 years, Singh, who has an extensive background in medicine and biology, has visited India each summer to serve
at the health care facility.
This past summer, Singh also offered the opportunity to three Gannon students to join him following the Alternative Break Service Trip (ABST) they had been a part of in the district of Tamil Nadu, nearly 1,500 miles south of Gagaha.
Jimmy Gruss, who graduated from Gannon in 2016 with a degree in software engineering, fifth-year software engineering major Nate Carlin and senior mechanical engineering major Charles Oberle spent an additional three weeks in July assisting Singh with a free medical clinic at the foundation’s facility and cleaning up villages in the area.
The response to the health clinic was greater than anticipated. Singh taught the students how to check patients’ blood pressure, blood sugar and pulse, which they had practiced for two days prior.
After these preliminary general health checkups, Singh saw patients in need of further assistance.
Oberle, who had co-led the Gannon ABST to India prior to volunteering for Singh’s foundation, said that the group enjoyed the hands-on service they were able to provide in Gagaha.
“We were motivated to do something tangible – something that we could do for someone else where they could say ‘thank you,’ and know when we were done that we had just made someone else’s life more secure and healthier,” Oberle said.
Oberle also said that he was taken aback by how intensely poor the conditions were compared to those in the south.
“The village of Gagaha is like stepping into a portal back in time,” Oberle said. “Most people lived in thatched huts, there was absolutely no garbage system and stray dogs shopped the outdoor market as much as the humans did.”
Singh said that approximately 70 percent of the people of Gagaha and its surrounding villages live without a bathroom, electricity or running water. On top of that, most are manual laborers.
Many of those who attended the free health clinic, which provided services and medicine to over 150 patients over the course of three weeks, had health issues directly related to the effects of these poor conditions.
“It would be hard to find anything in the U.S. that would compete with the average living conditions in India,” Oberle said. “People just don’t have the resources like we do here.”
The students also witnessed patients who unfortunately could not be treated.Gruss said it was painful to see people turned away because their health issues were already too severe and too far along.
“We told a father that there was nothing we could do for his brain damaged son because encephalitis had already taken it’s course,” Gruss said. “These [experiences] were hard, but eye opening.”
Carlin said that one of the things that was made obvious to him was that money alone would not be able enough to solve the poverty in India.
“India, especially in the area we visited, needs educated volunteers to not only provide basic services like health checkups but also to educate the people who had never had that luxury,” Carlin said. “It cannot be ignored that poverty in India has been caused much by lack of opportunities.”
Singh praised the student helpers and said they’ll benefit greatly from the experience.
“They’re never going to forget it for the rest of their lives,” Singh said. “These kids were the three best ambassadors Gannon could ask for.”