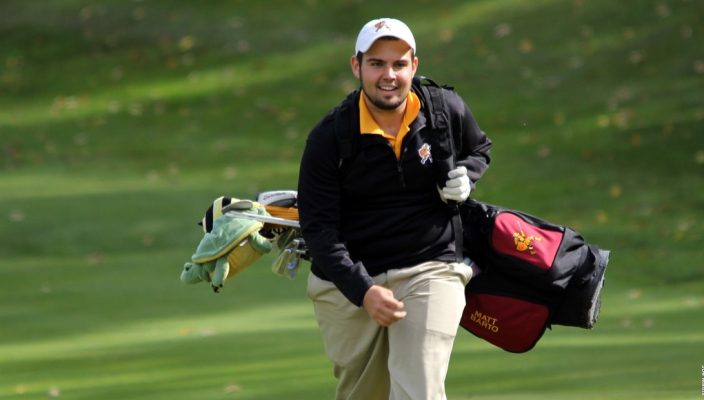 The Gannon University men’s and women’s golf teams have been swinging their way through successful seasons, and both have their sights set on next month’s Pennsylvania State Athletic Conference tournament.
The women’s team has played in five invitationals and has been very consistent in all of them. This includes the Le Moyne Fall Invitational, which was played in Jamesville, N.Y., on the weekend of Sept. 17-18.
There, the Knights finished third among 12 teams, thanks in part to the standout effort from sophomore Carley Sawyer, who shot a final-round 76 to tie for 10th place overall with a two-round total of 156.
That marked Sawyer’s low tournament total on the season.
Seniors Manuela Quevedo and Nicole Filipski had a solid two days on the par-72 course, shooting 160s to tie for 15th place.
At the Old Dominion University Cumberland Golf Classic last weekend, the Knight women placed fifth among eight teams.
Sawyer shot a career-best 75 in the second round to move up to a tie for 15th place overall. Her final round enabled her to climb 11 spots on the day.
Quevedo wound up 19th with a total-day total of 159 that included an opening-round score of 76.
Cris del Diego finished 28th overall with her career-best two-round score of 166.
Several of the Knights also competed at the Allegheny Invitational, which concluded Monday. Samantha Gaffney was Gannon’s top player with a score of 166 over two rounds.
The men’s team’s most recent outing came Sunday and Monday at the Mercyhurst Invitational, where the Knights finished ninth among 13 teams.
Matt Barto paced the Knights, finishing in a tie for seventh with rounds of 71 and 77 for a total of 148.
Ethan Bennett and Jordan Henry tied for 43rd overall with two-day totals of 160.
On Sept. 11, Gannon concluded its two-day run at the Allegheny Invitational, where the Knights finished seventh among 18 teams.
Barto again led the way, finishing in a tie for 14th overall with a two-day score of 152. Billy Colbert wound up 17th with a 79-74-153.
The Gannon men will be hosting the Howard “Bud” Elwell Invitational, which gets under way Sunday and concludes Monday at Whispering Woods Golf Club. This is will be the last regular-season competition for the team.
At the end of the month both teams will compete at the PSAC championships. Hosted by Hershey Country Club, close to 18 teams will be swinging to get their hands on the PSAC trophy.
The men’s team will be looking to dethrone the Indiana University of Pennsylvania Crimson Hawks. Gannon’s women team, on the other hand, will be looking to repeat last year’s championship run.