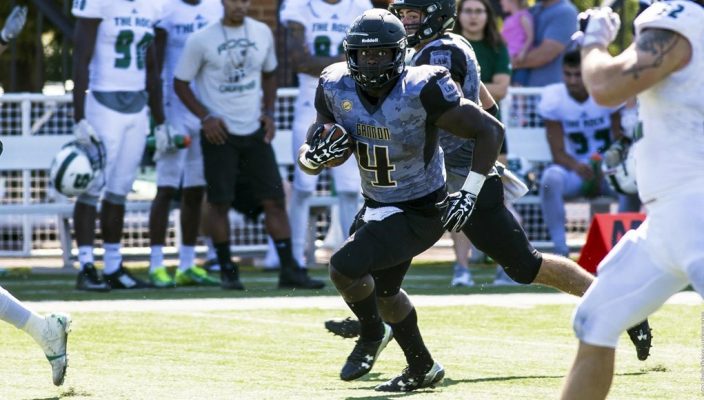 In a shootout that will always be recognized in Gannon University’s football record book, the Knights played a hard-fought matchup against unbeaten PSAC foe Slippery Rock Saturday, but the host Rock came away with a wild 49-45 victory.
Both teams showed off their skilled players for some incredibly dynamic action, but the result was the third straight loss for Gannon, which will take an overall record of 1-3 and a 0-1 PSAC mark into Saturday’s 1 p.m. matchup at crosstown rival Mercyhurst.
The Knights will be looking to spoil the Lakers’ Homecoming party at Tullio Field.
Gannon, which trailed by 14 points late in the second quarter, rallied to go ahead, 45-42, with less than 3 minutes remaining in the game on Marc Jones’ 76-yard touchdown run.
But the Rock answered a little more than a minute later when Tanner Garry connected with Marcus Johnson on a 73-yard scoring pass, and Jake Chapla’s PAT made it 49-45.
Jones would get 27 touches in the game and made each one count. He racked up 354 rushing yards and four touchdowns, setting PSAC and Gannon records for rushing yards in a single game.
Currently the leading rusher in NCAA Division II with 878 yards, Jones was only 64 yards away from breaking the Division II record for single-game rushing yards.
Gannon coach Brian Rzyczycki credits some of Jones’ success to two returning offensive tackles paving the way for Jones to rush like he does.
“You don’t just run the ball 399 yards and have it because of one person,” Rzyczycki said “That whole offensive line has to be blocking in front of you.”
Rushing all over the field wasn’t the only task on Jones’ to-do list, as he also had four receptions for 95 yards, including a 51-yard touchdown pass from Jimmy Keefe. He finished with 449 all-purpose yards.
Keefe, the redshirt freshman, continued to find his rhythm with the offense in his second career start, as he threw for 182 yards and two touchdowns.
“I think the kids really gravitate to him (Jimmy Keefe),” Rzyczycki said. “He has the most amount of yards thrown in a state game and so the moment is never going to be too big for him… but it’s going to take him time.”
The game was an offensive slugfest, as the two teams combined for 1,182 total yards, with Slippery Rock gaining 597 to Gannon’s 585. Slippery Rock did the bulk of its damage through the air, as Garry completed 33-of-51 passes for 518 yards and five touchdowns.
Gannon, meanwhile, rode Jones to a big edge in the rushing category, piling up 399 net yards rushing. The Knights’ rush defense was not something to mess with as the Rock managed only 2.3 yards per carry.
Much of this credit goes to linebackers James Simms and Anthony Howard. Simms recorded 11 tackles on the day but was outdone by Howard, who had 12 — including a huge sack on third down and short midway through the third quarter.
Gannon trailed 20-7 five minutes into the second quarter after Isiah Neely scored on a 2-yard run for Slippery Rock. But Jones’ 10-yard touchdown run and a 1-yard run by Keefe helped cut the margin to 27-20 at halftime.
The Knights scored the first two touchdowns of the third quarter – one on Jones’ 38-yard run and the other on Keefe’s 24-yard pass to Nico Law. But a missed PAT and a failed two-point conversion pass left Gannon with a 32-27 edge late in the third quarter.
However, that lead would be short-lived as Marcus Johnson returned the ensuing kickoff 88 yards for a touchdown, giving Slippery Rock a 33-32 lead going into the fourth quarter.
Gannon regained the lead at 38-33 on Jones’ 51-yard scoring pass from Keefe, but Slippery Rock took it right back on Garry’s 16-yard touchdown pass to Johnson, and Chapla’s 43-yard field goal increased the Rock’s lead to 42-38.
After Johnson’s touchdown pass put the Rock on top 49-45 with 1 minute, 36 seconds remaining, Gannon had one final chance to retake the lead. The Knights drove to the Rock 29-yard line, but Jones came up short on a fourth-and-2 play with 39 seconds remaining.
In Mercyhurst, the Knights will be taking a 2-2 team that is coming off a close 21-18 win over Clarion.
Rzyczycki said the team lives day by day and realizes that Merychurst offers a different challenge.
“It will be exciting to say the least,” Rzyczycki said.