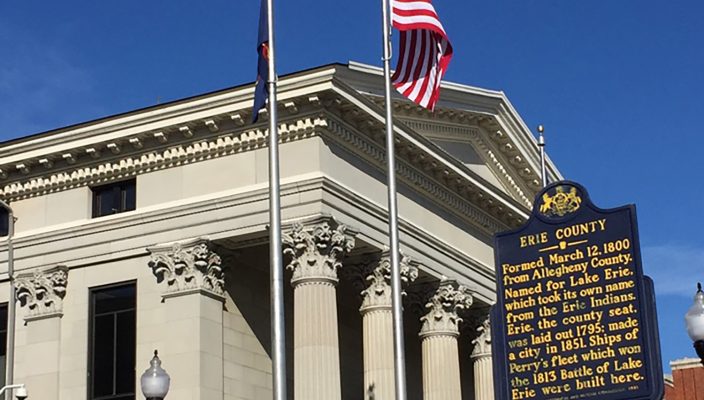 Local elections to be held

With local elections fast approaching, it seems everyone in Erie wants a piece of the pie. It’s no surprise, then, that of the nine candidates running for mayor and 19 running for City Council, three of them are involved at Gannon University.
Almitra Clerkin, a Gannon graduate now working on her master’s of health communication at Gannon and wife to the Rev. Shawn Clerkin, the co-director of the School of Communication and the Arts at Gannon, is running for mayor while two students are competing for seats in the City Council race. Clerkin’s campaign was previously featured in The Gannon Knight on Jan. 25.
In addition, one of the candidates running for magisterial district judge is from Gannon. Les Fetterman, the director of Campus Police and Safety, is on the ballot for Millcreek after completing his certification test.
Kevin Otteni, a graduate student in the engineering program, and Michael Haas, an undergraduate double major in political science and theatre, are looking at City Council positions, where there are only four openings.
Otteni, a father of three and chemist at Lord Corp., said he noticed more and more friends and co-workers moving out of Erie for better tax rates, while Erie itself has been in a steady decline.
“The leaders we have now are crashing the plane slow and I don’t think I can stand by and not do anything,” Otteni said. “Mine is just a drive to be part of Erie’s rebound.”
Some of the biggest concerns he has for Erie are the school system and community issues like blight. Otteni’s youngest two children attend Montessori charter school and his oldest daughter is a student at Collegiate Academy.
As an outsider looking in at the public schools, Otteni said he doesn’t see equity or equality.
“We need to stand shoulder to shoulder when we reach out for funding,” Otteni said. “[The system] needs to mirror what they’re doing at Collegiate.”
Otteni compared blight to a black eye, saying properties lasting beyond their occupied life create an issue. He suggested stronger enforcement of city codes and a push to invest in downtown properties to combat blight.
“The level of inaction happening is in code enforcement,” Otteni said. If elected to City Council, he said he would address questions like why only 12 properties were abolished in Erie. An Army Reserves captain, Otteni said his military experience has taught him to ask hard questions and go against the status quo – important skills for City Council.
“I just don’t like the way it’s going [in Erie], so I think if I’m elected May 16 I can help steer the ship in the right direction.”
Conversely, Haas said the No. 1 reason he is running for office is to show that Erie young people can run for public office. He said the average age of candidates running for public office is 45, which offers no perspectives from his own generation.
“It’s not popular for our age group; it’s not attractive,” Haas said. “It seems ugly and gritty, and it’s always going to be that way until young people get involved.”
Unlike Otteni, Haas said he just hopes to bail out a sinking boat, because he acknowledged he couldn’t fix everything.
“I’m taking my thimble and bailing out the boat,” Haas said. “And if we can get enough people to bail out the boat, it just might help.”
Dressed in a gray hoodie, Haas spoke with unbridled enthusiasm on his campaign points, like economy and community policing. He said City Council could benefit the economy with zoning laws by designing zones for cluster communities.
“You have these places like Virgil’s Pizza that created little communities for people around it,” Haas said. The other point for economic growth is convincing college students in Erie to stay in the community after graduation.
One way to do this would be to offer tax incentives on downtown properties, which might prevent blighted properties while allowing young people to own property.
“The city is not reaching out to young people and providing them a reason to stay,” Haas said.
As for community policing and reducing crime rates, Haas said working with local businesses like Erie Insurance, UPMC and Gannon to provide city lighting would be the first step. Community policing is effective when community members know the police, Haas said.
“We need [to see] officers as people to create mutual relationships,” Haas said. This happens when police are embedded, so to speak, in higher density criminal areas and live nearby to bring human to human contact with police back.
As a city of immigrants, Haas said another reason he is running is to vouch for Erie’s refugee population. He said seeing the hopefulness of Nepali children during his time campaigning showed him the spirit Erie needs.
“We need that in Erie,” Haas said. “We don’t need the people who are going to bring it down.”
Haas also touched on the heroin epidemic in Erie, saying the dangerous thing about it is the people affected are those who grew up in the suburbs and come to the city, where they turn to drugs when they find nothing to do.
“We need a city with a vibrant night life and culture for the young people,” Haas said. But, as a student in downtown Erie, he did not express bitterness for the city.
“I wouldn’t be running for City Council if it wasn’t for Gannon,” Haas said. “It taught me to love Erie, but it also has showed me the problems here.”