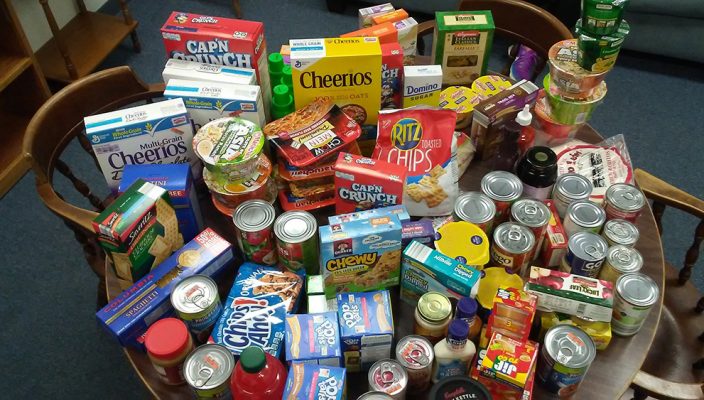 Students and faculty are teaming up to fight hunger at Gannon University, following a trend on college campuses across the nation that is addressing the oftentimes overlooked epidemic.
Sophomore social work major Shayla Jones is an Erie resident and a member of the First Generation United Club (First Gen Club) for students, which is meant to be a support group for those who are the first in their families to attend college. With the help of the First Gen Club, Jones recently founded Gannon’s first food pantry for students.
“Gannon, our students, we do so much to help those within the Erie community, [so] we wanted to focus on ‘in house’ issues,” Jones said. “You know, the needs of the students.”
Jones said the idea came about when a student told her, “If you cannot afford to feed yourself, you should not be in college.” She was also motivated by her own experiences as a homeless student during her early time at Gannon.
“There were many times I had to go without food throughout the day,” Jones said. “I wanted to know if I was truly the only student on campus facing this issue [of], you know, food insecurity.”
In an effort to begin to understand the magnitude of the issue within the Gannon community, Jones started by bringing food items to First Gen Club adviser Laura Rhodes in the Student Success Center. The donated items were offered to a limited number of students and were arranged to be distributed to those who were interested. Rhodes said that after seeing how quickly the items were going out the door, she and Jones knew that Gannon needed a campus-wide food pantry.
After the overwhelming response to the trial pantry, a permanent location in Room 1221 of the Palumbo Academic Center was secured and the student food pantry was officially up and running. Following her election as president of the First Gen Club, Jones said she immediately placed the care of the pantry under the club’s name to ensure its place at Gannon long after she graduates.
Jones said that any volunteers would be greatly appreciated, as the pantry is currently low on help. Any students who would like to support the pantry can offer to assist during pantry hours, help collect donations or create fliers to increase awareness.
Rhodes said that the pantry is also currently in the process of working with Northwest Pennsylvania Second Harvest Food Bank to keep the most popular items in stock, and therefore any monetary contributions would be greatly appreciated as well.
She went on to say that the subject of hungry students has been an issue of both concern and pride.
“The concern comes from knowing  that there are many students struggling to meet their basic needs,” Rhodes said. “It is difficult to perform at your best if you are hungry.
“The pride comes from the eagerness of students and employees of Gannon to work together to help these students get the supplies they need to succeed in their pursuit of a degree.”
Interested students can contact either Jones or Rhodes to discuss various volunteer opportunities, which will count as official service hours on engageU, or to make a donation to the pantry.
Jones said that she’s had students openly admit to her that they were too embarrassed to use the pantry, and that some people’s assumption that all Gannon students are financially stable because they attend a university weighs on those who need help. She hopes that as the pantry continues to grow, more students will feel comfortable using the pantry rather than ashamed.
“It is important for students who desire an education,” Jones said. “They won’t have to choose between buying books and buying food.”