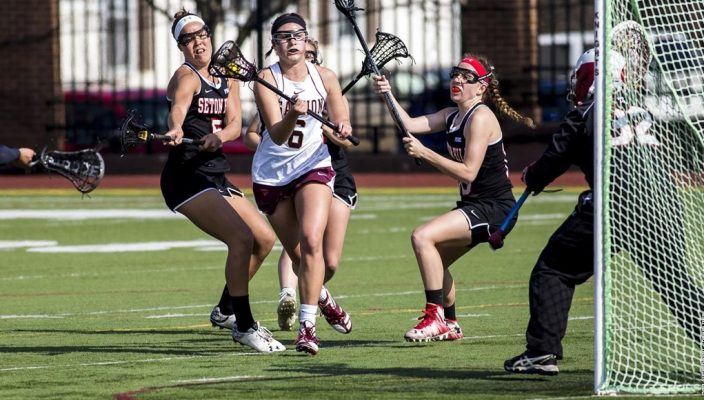 The Gannon University lacrosse team is looking to finish its season on a high note by hosting Edinboro University at 4 p.m. Wednesday at McConnell Family Stadium and then traveling to battle Millersville University at 1 p.m. Saturday.
The team will bring an overall record of 4-10 and a PSAC mark of 2-8 into the final two games. Looking back at the last month of action, though, there are definitely high points from the team and individuals as well.
On April 8, the team took on Shippensburg University in its annual Senior Day match. The Knights recognized the efforts and careers of their two seniors — Katie Miller and Tessa Mitchell — and came out with a 9-8 win.
After Mitchell scored the tying goal at the end of the first half, the teams were locked at 4-4. Moving forward, Mitchell would claim the hat trick and then some, finishing with five goals.
Her last goal would come with 10 minutes left in the game, tying the score at 8-8.
The two teams would stay at 8 goals each approaching the end of the match. A huge reason for this was freshman goalie Charla Tate standing her ground and making 11 saves in the match.
With one minute left on the clock, it was freshman Kennedy Walters getting the unassisted, game-winning goal.
On Saturday, the Knights hosted another match — this time against Lock Haven. Leilani King seemed to be the star of this showdown, having a hat-trick with both goals and assists to lead Gannon to an 8-7 victory.
Mitchell would have another three-goal match as well, but it was sophomore Kayla Shields who had the two very impactful goals of the match.
Shields scored with a little less than 9 minutes to play, giving Gannon a 7-5 advantage, and after Lock Haven pulled to within a goal again three minutes later, Shields restored the two-goal edge with 3 minutes, 48 seconds remaining.
Lock Haven again cut the lead to one goal at 8-7 with 1:42 to play, but Gannon would hang on for the win – the first time the Knights beat Lock Haven since 2004.
Though Gannon has a 2-5 record so far during the month of April, the team has still performed well at times. This would include King scoring her 100th career goal in the Knights’ matchup against Seton Hill on April 12.
King became the 18th player in Gannon history to reach the 100-goal mark for her career. She also moved into sixth place all-time in ground balls (140) and seventh all-time in caused turnovers (64).
Keep up with the Knights as they wrap up their season on Gannon’s athletic website at www.gannonsports.com.

« Gannon acrobatics tumbles from east to west Today in History: 1975 »