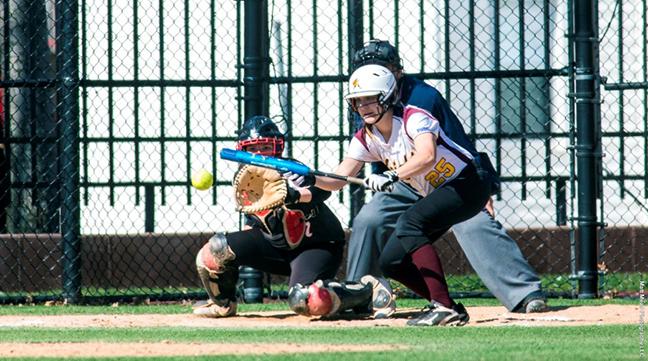 After 14 games and three postponed doubleheaders, the Gannon University softball team has been taking the PSAC by storm.
In their last 14 games, the Knights have won nine games and lost five, and they’ll take an overall record of 24-11 and an 11-5 mark in conference play into their final two PSAC doubleheaders of the season – at 4:30 p.m. Friday at California University of Pennsylvania and at 1 p.m. Saturday against Slippery Rock at McConnell Family Stadium.
After a postponed doubleheader on April 4 against Mercyhurst University, Gannon came back the next day and split the twinbill with the Lakers. The Knights won the first game, 8-7, after a bunt by sophomore Kherrin Morgan that brought in freshman Rachel Tanilli from third to seal the walk-off victory.
The Lakers got their revenge the next game, winning 7-3. The Knights laced up their cleats three days later after two postponed doubleheaders to sweep Edinboro University, 2-1 and 4-3.
Gannon continued its win streak the next day against Slippery Rock University by taking both ends of a doubleheader with identical 4-3 scores.
In game two, sophomore Kellyn Perich put the Knights up 4-3 to seal the victory after delivering a single to right and then toed the rubber to shut down the Rock and preserve Gannon’s 20th win.
On April 14, Gannon split two with California (Pa.), losing the first, 3-2, and winning the second, 4-3. Game two came down to the wire as Morgan blooped a single over the second basemen to score junior Autumn Smith and win the game.
Four days later, the Knights dropped a pair to Mercyhurst, falling 5-4 and 5-1. But Gannon came back the next day against Edinboro and won two games, taking the first, 3-2, after a Tanilli double and a bunt from freshman Lisa Szajn that brought in Tanilli in the seventh.
Game two ended in similar fashion, but the Knights needed nine innings to capture the win. With the bases loaded in the ninth, freshman Sarah Ingerick laid down a bunt to bring in freshman Maria Taliani in the walk-off win.
In their most recent outing on Saturday, the Knights split two games against Seton Hill in Greensburg, Pa., losing the first game, 4-0, before winning the second, 1-0, as freshman Madi Beining threw a three-hit complete game shutout.
On the season, Jackie Martinez is leading the Knights with a .402 batting average and a team-leading 45 hits. Morgan’s 20 RBIs lead that category while Taliani tops the team in slugging percentage with a mark of .627.
On the mound, Perich has compiled a 3-3 mark with a 1.46 earned run average. Olivia Gumbita is 13-5 with a 1.75 ERA and Beining checks in with an 8-3 record and a 2.26 ERA.
Sophomore Ashley Bower said the team is playing with a chip on its shoulder and that there is nothing better than being picked for last in the region and currently being in first place due to their hard work.
“Our goals for this season are huge and I really believe we can get to where we want to be if we keep improving every day and supporting each other on and off the field,” Bower said. “I can’t wait to continue having fun with this team in postseason. Work hard. Stay positive. Never surrender.”