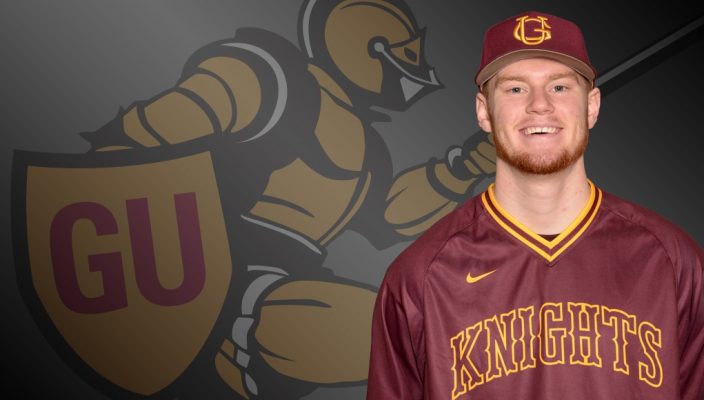 The Gannon University baseball team enjoyed a huge Pennsylvania State Athletic Conference victory over the nation’s top- ranked team, Mercyhurst University, Saturday, to cap an otherwise disappointing couple of weeks of play.
On April 5, Gannon lost to Notre Dame College (Ohio), 7-3, followed by losses in both games of an April 8 doubleheader at the University of Pittsburgh at Johnstown, 10-8 and 3-2.
The Knights rebounded the next day by sweeping the Mountain Cats, 3-2 and 4-3. Gannon was off until April 14 when the Knights fell twice to California University of Pennsylvania, 6-4 in nine innings and 7-6 in the nightcap.
Gannon gained its revenge three days later as it split the following twinbill versus the Vulcans, winning the first game, 15-6, and dropping the second 7-5.
Gannon returned to action on April 19 in Canton, Ohio, against Malone University in its fifth doubleheader in two weeks, but dropped both contests, 9-0 and 7-5.
Gannon wrapped up its stretch of 15 games in just over two weeks with two doubleheaders against the nation’s No. 1-ranked Division II squad in rival Mercyhurst University.
Mercyhurst took both games of Friday’s doubleheader, 6-5 and 5-0. Gannon split the next pair the following day, dropping the first game, 10-4, and then riding sophomore pitcher Jarod Morrison’s two-hit shutout to a 4-0 victory.
Although few, Gannon’s wins were impressive and full of clutch hits with runners in scoring position. In its first and second win against Pitt-Johnstown, the Knights were keyed by freshman Elijah Quiceno’s sixth-inning home run and junior Matt Oruch’s walk-off single to sweep a PSAC Western Division matchup.
A strong seven-inning performance on the mound by junior David Cricks kept the scoring to a minimum, and he was backed up by two big flies to left field. Junior Nate Cardy provided the first shot in the bottom of the first, before Pitt-Johnstown turned its one-run deficit into a one-run lead in the top of the second.
Gannon tied the game on junior Mike Colosi’s single and he later scored on junior Kyle Cox’s RBI single. Quiceno’s blast put the game out of reach for good at 3-2, despite a top of the seventh inning threat by Pitt-Johnstown.
In game two, Quiceno pulled through again in the first inning scoring junior Gregory Nicolia with a single. The Mountain Cats took a 3-1 lead into the bottom of the fifth inning before Gannon cut the deficit to one with a run of its own. Nicolia ignited the scoring with a leadoff double and scored on back-to-back ground outs by Oruch and Cardy.
Morrison kept Gannon’s chances alive by retiring the final eight Mountain Cats of the game.
The Knights scored the two runs they needed in the bottom of the seventh via small-ball to walk off winners of two on the day.
Cox led off with a line drive up the middle before junior Charles Benack dropped a sacrifice bunt, which moved Cox to third on an errant throw with no outs.
Nicolia followed with a bunt of his own to score Cox and put the winning run into scoring position. A wild pitch moved Benack to third base, and Oruch scored him on the first pitch he saw to end the game at 4-3.
After a disappointing game one of Saturday’s doubleheader with Mercyhurst, Morrison took matters into his own hands with a dominant performance in the nightcap against the top-ranked Lakers.
Morrison tossed seven innings of shutout baseball, only allowing two hits and striking out eight for his first career shutout and second career complete game.
Gannon scored two runs in its first at-bat, which proved to be the only runs the Knights needed. Nicolia and Colosi led off with singles before Cardy drove in Nicolia and Colosi scored on a sacrifice fly.
The Knights extended their lead to three in the second inning when Nicolia tripled with two outs, then scored on Colosi’s double.
Gannon added its fourth and final insurance run during the bottom of the fifth when Cardy reached on a two-out error and scored on Cox’s double.
Morrison faced a sixth-inning jam with runners on the corners, but he froze the Lakers’ Matthew Schneider on a called third strike to end the frame.
Morrison also struck out the side in the seventh to end the game strong.
The win was Gannon’s first in program history against a team ranked No. 1 in Division II.
Gannon is currently listed among others receiving votes in the latest NCBWA Atlantic Region Poll and will return to action Friday against Slippery Rock in a 1 p.m. doubleheader at McConnell Family Stadium.
With this being the last issue of The Knight for the academic year, keep up with the Knights on Gannon’s athletic website: www.gannonsports.com.