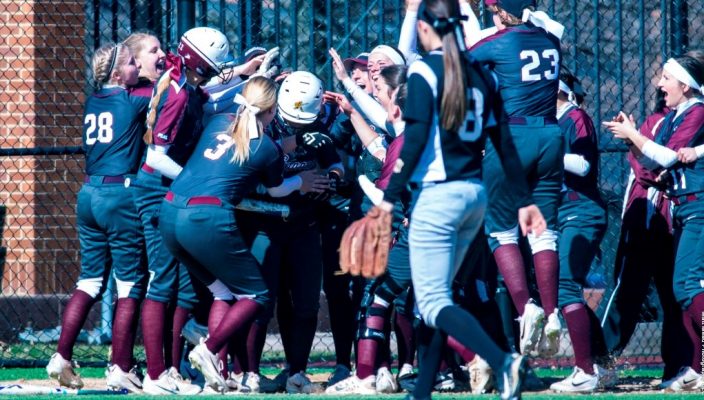 It was a very positive week for Gannon University’s softball team. The Knights went 3-1 to improve to 15-6 overall and 2-0 in PSAC play, and they claimed some weekly awards in the process.
Gannon split a doubleheader with Lake Erie College Wednesday, winning the first game, 1-0, after a walk-off home run from senior Jen Moran, and lost the second game 4-3.
Sunday provided the Knights with two more wins over Seton Hill, winning game one, 2-1, and sweeping the second game, 2-0.
The PSAC named second baseman Moran the Western Division athlete of the week and senior Olivia Gumbita the pitcher of the week.
Earlier in the week, Gumbita pitched a two-hit shutout against Lake Erie and struck out eight batters while yielding no walks.
Moran went 3-for-7 at the plate over the week, including her walk-off homer to lead off the seventh inning against Lake Erie.
Gannon’s second game that day against the Storm provided more action on the offensive side. The Knights would put runs on the board first thanks to Morgan Nyman’s RBI single in the third inning, which drove home freshman Maria Taliani.
Lake Erie would retaliate with back-to-back runs in the following inning, giving the Storm a 4-1 lead. That ended the scoring for Lake Erie as the Knights collected two more runs, but it wasn’t enough and the Storm took game two 4-3.
With their doubleheader against Mercyhurst being postponed on Friday the Knights didn’t have another game until Saturday as they hosted Seton Hill for a doubleheader.
Much like the first game against Lake Erie, this game too would come down to the last inning for Gannon.
Gumbita took the mound again for the Knights, and would continue her pitching dominance by allowing only five hits and striking out four.
Seton Hill gained the lead in the top of the fourth on a Gannon error and held the lead at 1-0 until the last inning
The bottom of the seventh proved to be the spot where the Knights showed they have a late in the game clutch factor.
This time it was Taliani hitting the booming home run to score Taylor Wilp and give Gannon the 2-1 win.
The second game was similar to the first game as Taliani singled and scored on a hit by Sarah Ingerick in the bottom of the second inning.
Then in the bottom of the fifth Ingerick would score on a double play. The Knights held their 2-1 lead to claim the second game victory 2-0.The weather seems to not want the Mercyhurst-Gannon game to happen as the doubleheader has been postponed on three different occasions.
Now the weather seems to looking in both teams’ favor as it is scheduled for Wednesday on Mercyhurst’s turf. The first pitch is set to be thrown at 5 p.m. and the latter half of the doubleheader will begin at 7 p.m.
Following the matchup with Mercyhurst, Gannon will travel to take on Edinboro in a 2:30 p.m. doubleheader Friday and then will visit Slippery Rock for a 1 p.m. doubleheader Saturday.