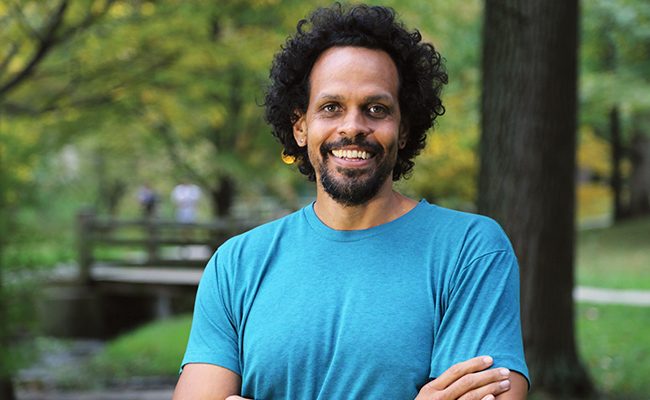 The Gannon University English department will host acclaimed poet Ross Gay and those inclined to listen to him at the campus-wide English Awards Night at 7:30 p.m. April 5 in the Yehl Ball Room.
Originally from the suburbs of Philadelphia, Gay has penned three books: “Against Which,” “Bringing the Shovel Down” and “Catalog of Unabashed Gratitude,” winner of the 2015 National Book Critics Circle Award and the 2016 Kingsley Tufts Poetry Award.
Gay is one of the founding editors for the online sports magazine Some Call it Ballin’, and does editing work for the chapbook presses Q Avenue and Ledge Mule Press.
Gay is a founding board member of the Bloomington Community Orchard, a nonprofit, community orchard that grows fruit for Bloomington.
Previously, Gay received fellowships from Cave Canem, the Bread Loaf Writer’s Conference, and the Guggenheim Foundation. He also teaches at Indiana University.
Besides Gay reading his poetry, the event will recognize students for achievement in all styles of writing, from journalism to research to poetry, with the presentation of awards in high school, undergraduate and graduate-level categories.
Totem, Gannon’s student-produced literary magazine, will also be released at English Awards Night. The publication is free and features poetry, prose and artwork produced by Gannon students.
Leigh Tischler, a senior English major and head editor of Totem, said the magazine serves is the soul of campus.
“We’re that spark that proves our campus is not just living, we’re alive,” Tischler said. “In Totem, scientists get to be poets and artists get to be researchers and the world gets to be whatever we make it.”
Berwyn Moore, a professor in Gannon’s English department, said students should attend English Awards night because it’s a great opportunity for Gannon and the Erie community to hear an acclaimed poet.
“If you were in New York City and wanted to hear someone like Ross Gay, you’d have to pay $50,” Moore said.
Tischler said she is excited to hear Gay read his poetry, which she described as vivid snapshots of life.
“Gay doesn’t shy away from talking about difficult topics, but he does it with enough charm to bring the us into it with him,” Tischler said.
Moore described the awards night as one the biggest and most important spring events on campus, especially because it is the 40 th annual.
Even if it’s your last year to go, Moore suggests students should take a risk and try English Awards night.
“You’ll probably be glad you did,” Moore said.
“This is not an English event, this is a cross disciplinary event that honors students from every college.”