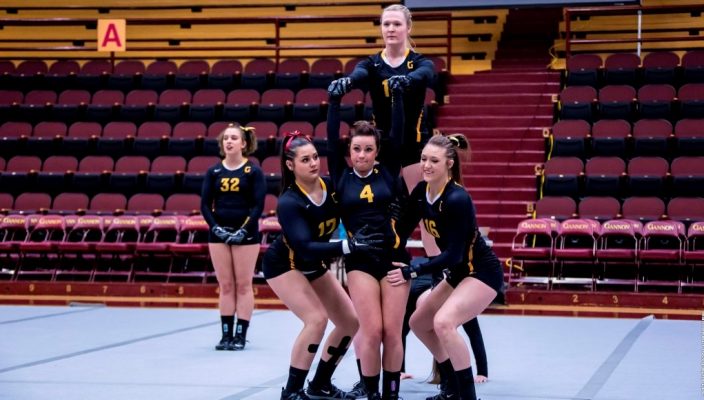 Gannon acro and tumbling falls to Division I Baylor

For the first time since the 2016 NCATA National Championship, the Gannon University acrobatics and tumbling team traveled to Waco, Texas, to face the defending national champion Baylor University Bears Sunday.
Off to a strong start, and with a great showing of heart, the Knights made it a close affair but ultimately came up short against the nation’s top-ranked team, falling 287.825-271.320.
Gannon, ranked eighth in the National Collegiate Acrobatics & Tumbling Association (NCATA), trailed by just 2.3 points at halftime, 98.55-96.25.
The fact that Gannon gave the nation’s best team a tough battle didn’t come as a surprise to team members like Gina Pergolizzi, who said the Knights’ heart and will keep them strong and ready for competition.
“The team is very accepting and has a strong will to succeed in everything they do,” Pergolizzi said.
Sunday’s matchup included many strong performances. In the compulsory event, comp toss, Gannon scored 9.95 points out of 10 possible points.
In seven of the eight possible events, Gannon scored within one point of the possible points allotted to each event. Besides the compulsory event, the aerial pass was the team’s second strongest event receiving 9.80 out of the 10 possible points.
Following those strong performances, in the 6 element and the 5 element, the team posted a score of 9.80 out of 10 for both events, making a strong case for a win.
In the 6 Element Pass, the team received a score of 9.55 out of 10 allotted by the judges in which Pergolizzi was the athlete.
Throughout the event, the team showed support to each other and aided each other through performances. After long, grueling practices the team has built a strong bond.
“We spend 20 hours a week together so we are around each other quite a lot,” Pergolizzi said.
“No matter what it is it’s always an adventure full of laughs with this team.”
After a close first half, the Bears started pulling away. In the team routine, the most heavily weighted performance, Gannon received 95.22 out of 105.93 possible points.
That was a strong effort, but not strong enough as the top-ranked Bears handed the Knights their second loss of the season.
Gannon looks forward to returning to the Hammermill Center in Erie for its final home competition against Quinnipiac at 6 p.m. Saturday, April 8.
After the home finale, the Knights will head west to take on Hawaii Pacific University in Kaneohe, Hawaii, on April 14.
The Knights’ final outing of the season is scheduled to begin April 27 at the NCATA National Championship, hosted by Azusa Pacific University.
“We have two regular competitions left this season before nationals,” Pergolizzi said. “We hope to improve on the things we’ve got in order to prepare us for the rest of our season.”