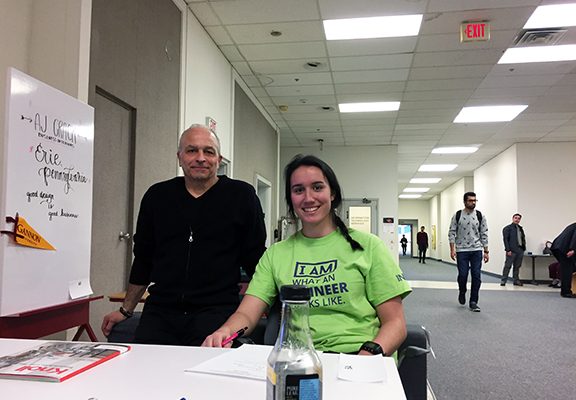 Gannon University’s Nash Library is seeing some big changes.
The renovations that are currently in progress on the building located on the corner of Sassafras and West Seventh streets are coming along smoothly, according to Ken Brundage, the director of Nash Library.
He also said that no major issues have come up this far.
“Of course, unexpected issues do crop up,” Brundage said. “But our general contractor, architect and Gannon physical plant staff have responded quickly to mitigate any problems that have arisen.”
Brundage said that at a meeting of project officials last week, the general contractor for the project confirmed that the renovation is on schedule and slated to be finished in November.
The opening isn’t expected to take place until January of 2018 in order to give the library staff time to move furniture, books, equipment and staff offices into the building.
Brundage said that there is a lot of activitiy on the job site right now.
“One of the most noticeable changes is the new windows that have been installed on about three quarters of the second floor,” he said. “Soon, the concrete fins on the north and south ends will be removed.”
Brundage also noted that the inside of the building has already changed dramatically. The new interior walls are almost done, the large stairwell in the center of the building has been removed and the team is beginning to fill in the resulting space on all the floors.
Other changes that the exterior has seen include the steel structure and decking for the new entrances on West Seventh and West Eighth streets and the holes that are being cut in the floors and ceilings on the northwest corner of the building to accommodate the new, four-floor stairwell.
Brundage also said that the layout of the green roof is being finalized.
“We are also beginning to make decisions on things like flooring and furniture,” he said.
Part of the decision process is student feedback that will be collected during and after the furniture vendor show, which was held Tuesday on the third floor of the Palumbo Academic Center.
The event showcased sofas, chairs, desks and other furniture that is being considered for possible use in the library and allowed students to test out the furniture and provide the library staff with their feedback.
Alli Hess, a sophomore advertising communication major, said that she thinks it’s really cool that the library is getting modern furniture.
“I think the furniture will definitely benefit students,” Hess said. “Especially the one nook-like desk they had because it would give us more privacy when we’re studying.
“I could actually get things done.”
The original Nash Library was a cutting-edge facility when it was built in 1973 and has served students and faculty well for over 40 years.
Updates to the library will include two new entrances, more study rooms, increased open space, a green roof and a café.
The grand opening of the renovated library is anticipated to be early in the spring 2018 semester.