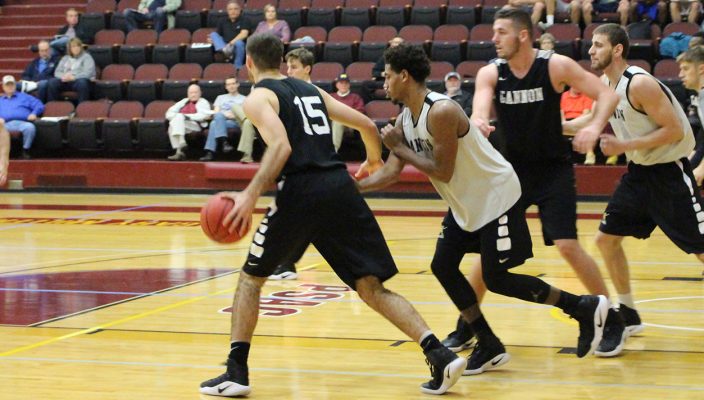 After starting the season with a 73-63 loss to West Chester, the Gannon University men’s basketball team was able to pick itself up with an 81-48 win over Cheney and an 83-77 victory against Lake Erie College, leaving the Knights at 2-2 on the season.
Gannon will look to improve that mark over the weekend, as the Knights host Lock Haven Saturday and Bloomsburg Sunday at the Hammermill Center. Both PSAC games will start at 3 p.m.
When it came to the win against Cheney, the Knights held nothing back and put their foot on the gas as they jumped on the Warriors early and kept on attacking them offensively.
Junior Zay Jackson led the charge for the Knights with a game-high 26 points in 33 minutes of play.
Sophomore Evan Phoenix produced his first career double-double while donning the maroon and gold colors. He made sure to keep it even between points and rebounds as he had 19 of each.
Other big scorers were junior Damon Miraud, who contributed 10 points, and senior Emmanuel Matey scored six points for the Knights.
Senior Matthew Dogan has a positive outlook for the season even though the team lost some good players from last year. He thinks this year’s team has a lot of potential.
“I’m excited about the new guys that we brought in because there is a lot of talent there and now we are working on meshing that talent together to get a cohesive basketball team,” Dogan said.
After the win over Cheney, the Knights hosted the 33rd annual Gary Miller Classic, where they fell short to Ohio Dominican, 66-56, in the championship round.
Dogan led the charge for Gannon, scoring 15 points to earn himself a spot on the all-tournament team presented by Gary Miller himself. Just behind Dogan was Jackson with 11 points, Phoenix with nine and junior Gerrell Williams with seven.
The two teams battled to a 26-26 tie at halftime, but Ohio Dominican was able to beat the Knights by shooting 56 percent in the second half.
Besides making it to the championship round, the highlight of the classic was Gannon’s 83-77 win over Lake Erie in the opening round.
The Knights came back in the last seven minutes, overcoming a seven-point deficit to advance to the championship round.
Williams came off the bench to lead the way with 20 points while Jackson contributed 18 and Phoenix 15. Gannon shot 46 percent from the floor and outrebounded Lake Erie, 44-28.
Early on Gannon jumped on Lake Erie with a 15-9 lead and maintained the lead until midway through the first half. But with Gannon leading 25-21, the Storm went off, hitting four straight 3-pointers to fuel a 16-3 run in less than four minutes of play.
The Knights didn’t take a backseat to this as they hit just as hard with a 12-2 burst to put themselves ahead by one at 42-41 after freshman Jimmy Burger hit a triple with 26 seconds left in the half.
However, Lake Erie went on top going into intermission thanks to another 3-pointer that made it 44-42.
The second half was a whirlwind for everyone as the final 20 minutes featured five lead changes and six ties. With the score at 67-60 the Storm appeared poised to pull away with 6:17 left in the game.
The Knights didn’t back down, though, as they came back to score 11 straight points, nine of which came from Williams. He tied the game with a free throw and then hit a go-ahead 3-pointer with 3:29 left on the board.
Gannon increased its lead to seven multiple times during the last minute of play before sealing the win.

« Stress of finals week already got you down? Today in History: 1973 »