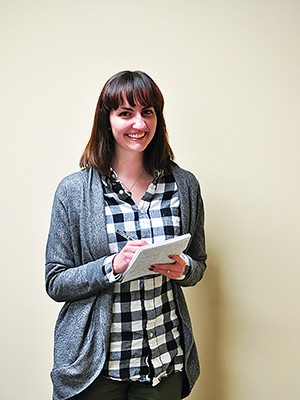 Calm down ladies, Feb. 14 is just another day of the month

While on a late night Wal-Mart excursion with my roommates, I pulled a bag of “Valentine’s Day” Twix from the shelf and got scolded for it.
“You’re really going to buy that now?” Mackenzie asked. “Why not wait till the 15th when everything’s 50 percent off?”
I said something to the effect of it doesn’t matter and carried that chocolate through the rest of the superstore. Even though I’m technically in a relationship, I still don’t see any value in Valentine’s Day festivities.
The whole thing is an overblown attempt at celebrating a saint’s feast day, and I’m not sure St. Valentine would be impressed with the way retail establishments cycle out any sign of Christmas by New Year’s and replace their seasonal aisles with pink cards and heart-shaped boxes of chocolate.
Leave it to America to monopolize a “religious” holiday. I’m sure it started out innocently enough.
People found it charming to give out cards anonymously until somebody wanted to make money off it. Good for him, the modern man feels trapped into buying his way out of the dreaded V-day.
The single man doesn’t have much to worry about, but God forbid the committed man forgets about Valentine’s Day. And God only knows why women expect men to remember a Greeting Card holiday and make dinner reservations to celebrate the abstract concept of their love.
Cut the guys some slack, ladies. Most men have a hard enough time articulating matters of the heart, let alone planning a day to showcase it.
That being said, the mentality behind Valentine’s Day makes me nauseous. If you need a designated day to love your significant other or wife or husband or family, you should be making an effort to be more in touch with your emotions.
It’s 2016, people. The modern man is no longer defined in a boxing ring. He’s actually expected to be a little bit sensitive. And this isn’t something I’m alone in thinking. The rest of my history class agrees with this sentiment, too.
They probably wouldn’t agree with me that we should be less stingy with our emotions, though. If you’ve read any of my other columns, you know I wear my heart on my sleeve.
I’ll tell you all about my boyfriend and his military vocation if you ask me about it. And if you have the misfortune of knowing me well enough, I’ll probably tell you stories about him when you don’t ask for it.
Life is too short to love somebody undercover or with reservations. That doesn’t mean you need to broadcast it to the streets or online, but that’s a rant for another time, and I have a kind of double standard when it comes to Internet etiquette.
However you choose to spend your Valentine’s Day is up to you, but I hope you are able to remove yourself from the societal standards of spending obscene amounts of money to achieve romance. I for one will probably be writing some kind of letter for my boyfriend to read later and having a beer with my dad.
I’ll still be spending it with some of my favorite men, but I refuse to splurge on anything but the Twix to call it a Valentine’s Day thing. It’s just another day.
KELSEY GHERING
ghering001@knights.gannon.edu