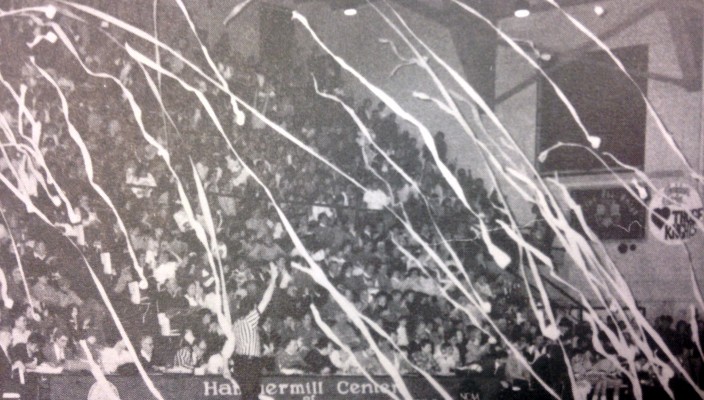 Gannon basketball not the frenzy it once was

During the 1980s the Hammermill Center — known until early 1983 as the Gannon Auditorium — was more of a circus than a basketball arena.

And sometimes the sideshow took away the spotlight from the main event — the men’s team.

There was coach Tom Chapman, 3,000 avid fans, “Murderer’s Row,” Gumby and of course the team that was the 1987 national runner-up.

In the 1980s, longtime Pace basketball coach Darrell Halloran said, “Gannon is Division II with a Division I atmosphere.”

The Hammermill Center was voted the “toughest” place for a visiting team to win in Division II numerous times.

And The Audi lived up to its hype during the 1984-1989 seasons under Chapman.

The wild Gannon faithful, along with juggernaut teams — including that 1987 team that rambled its way to the national championship game — saw Gannon post a 104-15 record at home during that span.

Chapman fed the beast that was the Gannon faithful.

It wasn’t uncommon to see Chapman enter The Audi and work the sellout crowds into a frenzy.

Down on the sideline — across from the Gannon bench — sat a group that was nicked named Murderer’s Row for its ability to get into the heads of the opposing players.

The row was notorious for its ability to talk to players and take them out of their games. Sometimes members down in the section would get so worked up they would get taken out of the game themselves – by police.

In the middle of the madness that was the Gannon crowd was a green childhood figure named Gumby. Jake Rouch, who was a Gannon student at the time, dressed in the sponge-like suit and slid up and down the Gannon stairs to fire up the crowd.

Gumby has since disappeared from the Hammermill Center.

That was then and this is now.

The Golden Knights have played five home games in front of 3,996 fans this season.

No, that’s not a single-game attendance record, that’s the entire season.

The Gannon athletics website describes the Hammermill Center as “packed to the rafters on most nights.”

Through five home games this season – with a 2-3 record at the Hammermill Center – Gannon averages 799 fans per game, with a high crowd of 906 on Dec. 1 against PSAC foe Indiana (Pa.).

The current average attendance, along with a rebuilding team that might not have playoff hopes, could be the lowest attended season in recent memory.

During the 2013-14 season, an average of 963 fans watched the Knights, the lowest average dating back to 2002 – the furthest attendance records go back on the Gannon website.

I would be remiss to not mention that the Hammermill Center did have a Tom Chapman era feel during the 2008-09 season when it averaged 1,754 fans a game.

That team was ranked No. 5 in the final NABC/Division II Top 25 poll, the highest ranking in school history.

The Knights won the PSAC and the NCAA Division II Atlantic Regional championships.

That season also turned the Hammermill Center back into a hostile environment. Three times Gannon was sold out that season, with nine games drawing 2,000 fans or more to the 2,800-seat arena.

But seasons like that have been few and far between and it’s not winning that cures all.

In 2001-02, the most attended season in the last 15 years with 2,124 fans per game, Gannon lost in the first round of the Great Lakes Intercollegiate Athletic Conference and NCAA tournaments.

More than 1,000 seats were still empty for one of Gannon’s biggest games since 2009.

With more students sitting on a couch on the south baseline than in the stands, a graying fan base and a mediocre product on the court, it doesn’t seem like the Hammermill Center will be intimidating visiting teams any time soon.

With more students sitting on a couch on the south baseline gia san go than in the stands, a graying fan base and a mediocre product on the court, it doesn’t seem like the Hammermill Center will be intimidating visiting teams any time soon.