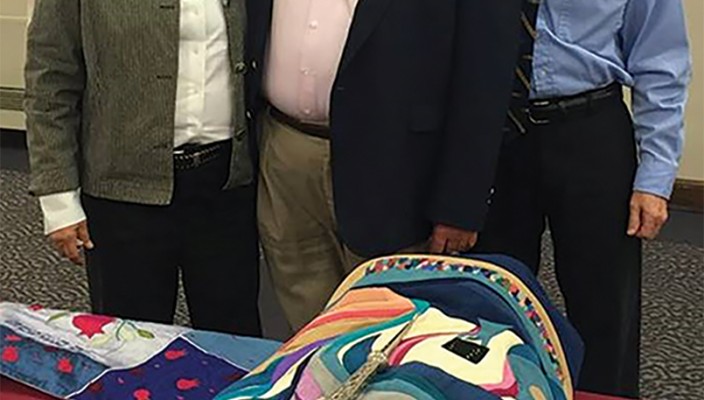 The communities of Gannon University and Temple Anshe Hesed came together in Waldron Campus Center Friday for an Interfaith Shabbat, a night of prayer and remembrance.

This service was the final event in a series as part of the “Deadly Medicine: Creating the Master Race,” exhibit’s time at Gannon and combined traditional prayers and readings from the Shabbat service with selections related to the Holocaust and peace.

Prayers from the usual Shabbat service were said in Hebrew. Afterward, the entire congregation was invited to repeat them in English. The English translations were those given in the prayer books at Temple Anshe Hesed, said Dennis Vidmar, a local physician and member of the temple’s Worship Committee.

They were joined by Gannon’s Deacon Steve Washek. The Temple’s rabbi, Emily Losben-Ostrov, and the Rev. Michael Kesicki, associate vice president of Mission and Ministry, were unable to participate due to prior commitments, though Rabbi Losben-Ostrov composed the service and Kesicki was also involved in planning.

The readings added to the service for this event were read by members of the Gannon community.

“It was really powerful,” Zurinsky said.

She said she read the words of someone who suffered such tragedy and still believed in God and the goodness of humanity.

“I looked up and saw the faces of people of faith beaming back at me and believing in the common good of humanity,” she said.

All who attended, whether from Gannon or Temple Anshe Hesed, were invited to come together as one congregation.

Before the service began, Vidmar asked everyone to sit together, instead of dividing into separate groups.

Sara Nesbitt, program coordinator for Gannon’s Center for Social Concerns, said the most meaningful element of the service for her was the connections with members of the Temple Congregation.

She said that those who sat near her explained parts of the service to her as they happened.

“That they were willing to change their worship experience for me was such as blessing,” Nesbitt said.

After the service, participants were invited to view the Torah, which had been brought from the temple for the occasion.

They also shared in refreshments, including the challah, bread designated for the Sabbath and Jewish holidays, blessed as part of the service.

The “Deadly Medicine” exhibit, which had been on display at Gannon since June, closed Sunday.