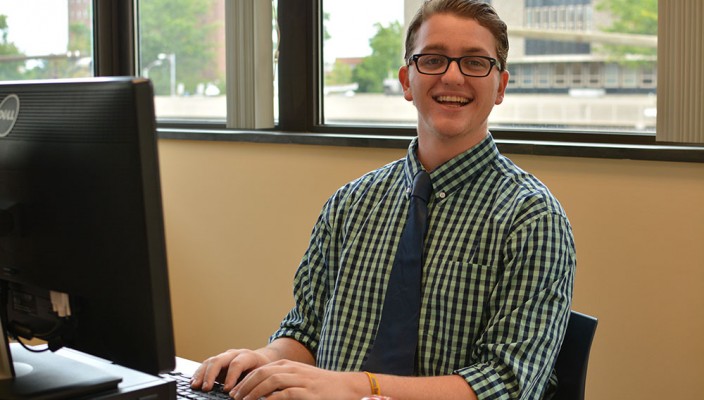 The Edmonton Oilers drilled into the 2015 National Hockey League draft lottery and a generational talent burst from the well.

The Oilers originally were seeded to pick third in the draft, but had an 11.5 percent chance to win the first overall pick. The hockey gods smiled down upon Edmonton Saturday night.

Erie Otters standout center Connor McDavid has been talked about as being the first overall pick in his draft class since he was 13 years old, and Edmonton has earned the right to make that notion come to fruition on June 26 at the BB&T Center in Sunrise, Fla.

McDavid finished the Ontario Hockey League regular season with 120 points in 47 games. He has maintained his 2.5 points per game average in the playoffs by scoring 11 goals and 12 assists in nine contests.

McDavid’s speed, vision, soft hands and leadership by example have him as the highest-rated prospect since Sidney Crosby entered the NHL in 2005.

Buffalo Sabres fans cringed as the Oilers logo was revealed and glowed with a golden tint, which signified Edmonton had won the lottery. Sabres fans frequently made trips down to Erie to get a glimpse at the possible future star of their franchise.

He even showcased his talents in Buffalo at the Sabres’ First Niagara Center on Oct. 22 by dishing out three assists and scoring one goal as the Otters defeated the Niagara IceDogs 8-4.

The Sabres strategically maneuvered through the season – trading away talented players and both of their goalies from the starting lineup – to ensure a dismal finish.

Buffalo secured the league’s worst record for the second consecutive season by posting a 23-51-8 mark to end the season two points behind the Phoenix Coyotes.

Many fans around the NHL felt that it was karma coming full circle when Buffalo was jumped by Edmonton in the lottery because some Sabres fanatics rooted against their team in the hope of receiving the right to draft McDavid.

That may be true, but the Sabres will be receiving a rare win on June 26. Boston University freshman center Jack Eichel will likely be selected second overall and will give the Sabres a 6-foot-2, 194-pound forward who will continue to grow into his 18-year-old body.

Eichel became the first freshman since Paul Kariya in 1992-93 to win the Hobey Baker Award, which is given to the best college hockey player. He led his league with 45 assists, 71 points and a plus-51 rating while averaging 1.77 points per game.

The 2014 Hobey Baker Award winner, Johnny Gaudreau, has made a huge impact on the success the Calgary Flames have experienced this season.

Eichel was also awarded the Hockey East player of the year, Hockey East rookie of the year and the Hockey East tournament most valuable player. His critics will note McDavid’s higher scoring totals, but the Erie Otters standout was doing that in a league with players ranging from 15-20 years old.

Eichel was the best college hockey player as an 18-year-old in a league filled with men. If McDavid wasn’t in the draft, Eichel would be the clear favorite for the first overall pick.

Sabres fans need to pick their heads up and understand the franchise-changing talent that will be making his way to Buffalo for the 2015-16 season. Forwards Evander Kane, Sam Reinhart, Tyler Ennis, Zemgus Girgensons and Eichel will all be under 26 years old going into the season and give Buffalo a core of young talent for years to come.

Defensemen Rasmus Ristolainen, Nikita Zadorov and Zach Bogosian are all under the age of 24 and will anchor the defense as the unit grows and learns together.

Eichel won’t come into Buffalo as the savior and lead the Sabres to the playoffs next season, but he along with the crop of talent the organization has gathered over the past four seasons will be the building blocks of a promising future.

The Oilers are in a similar situation, but always seem to reach for the most talented player instead of what the team needs to get better. Edmonton will now have had the first overall pick in four of the past six seasons, but continues to finish near the bottom of the league.

The Oilers always seem to need defensemen and goaltending, but can’t pass up the opportunity at the top offensive prospects.

Edmonton has selected forwards Taylor Hall, Ryan Nugent-Hopkins and Nail Yakupov with its first-overall picks from 2010-12. McDavid will add another dimension to the Oilers offense that the previous first selections couldn’t, but Edmonton would have been better suited by staying with the third pick.

Boston College freshman defensemen Noah Hanifin is projected to be selected third overall. The 18-year-old Hanifin is a promising prospect with a 6-foot-3, 205-pound frame.

He has a great offensive mindset and would help Edmonton on the power play, but would also offer the ability to grow into his role as a shutdown first-line defenseman.